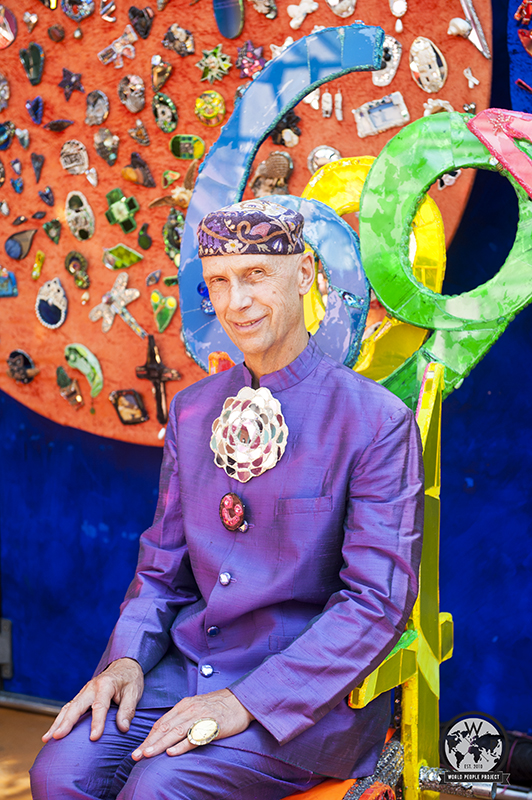 How long have you lived in London? Since 1970

Occupations: At the age of 14 I inherited from my brother my first job as a window cleaner. I went on to study architecture at Oxford. In my third year I travelled to North America, where I worked in an architect’s office in Winnipeg. After that I took a whirlwind trip around the United States by Greyhound, living in Hollywood with a relative, then visiting Haight-Ashbury. By this time, however, the purity of the hippy movement was fast disappearing. Returning to Oxford to finish my degree, I created an art installation in my own living room. This led to an invitation to participate in an exhibition at the Institute of Contemporary Arts in London. Thus began a life of artistic adventures. I started taking classes and workshops at the 4011/2 craft workshops that were set up by Michael Haynes in the early 1970s. Renowned artist Anthony Redmile taught me the techniques involved with resin, which I have evolved over the years. My work with resin, combined with my obsession with mirrors, forms the basis of most of my work. I have had many exhibitions and commissions over the years. In 1991 the Andrew Logan Museum of Sculpture was opened in the village of Berriew, Wales.

Passions and Interests: Parties!! Since I was a child I have thrown parties. In 1972 I threw the first Alternative Miss World, inspired by the world’s largest dog show Crufts. The judging is based on poise, personality and originality. Over the years, the Alternative Miss World contest has had different themes and winners, but anything goes, from director Derek Jarman dressed as Miss Crêpe Suzette to performance artist Leigh Bowery wearing nothing but a fried egg. I have a great love for yoga, which led me to become a yoga teacher. I teach a drop-in class once a week in Zandra Rhodes’ penthouse. Another passion is travel; if I hadn’t been an artist I would have been a traveller. I love the world.

What do people know you for? In some circles, I am known for the Alternative Miss World pageant; in other circles my sculpture and jewellery. In India I have a commission for a huge, sculptural a 45-foot long installation at the New Mumbai Airport. And, of course, my yoga students know me for yoga.

Thoughts on London? This is where I have lived since 1970; for me London means friends and family. I feel London is now in the grip of developers who are fuelled by greed. The face of London is quickly changing, a futuristic megatropolis is being built and the gap between the rich and poor is widening. Through all the changes the River Thames continues to flow.

The portrait of Andrew was taken on a blistering hot summer day at his home studio he calls The Glasshouse. Andrew has an extensive collection of silk Nehru suits designed by Barbara Hulanicki of famed London fashion store Biba. We decided upon a purple suit. A large mirrored broach was pinned on to the suit to complete the outfit. Andrew sat on a chair that is used as a throne for his Miss Alternative World pageant.