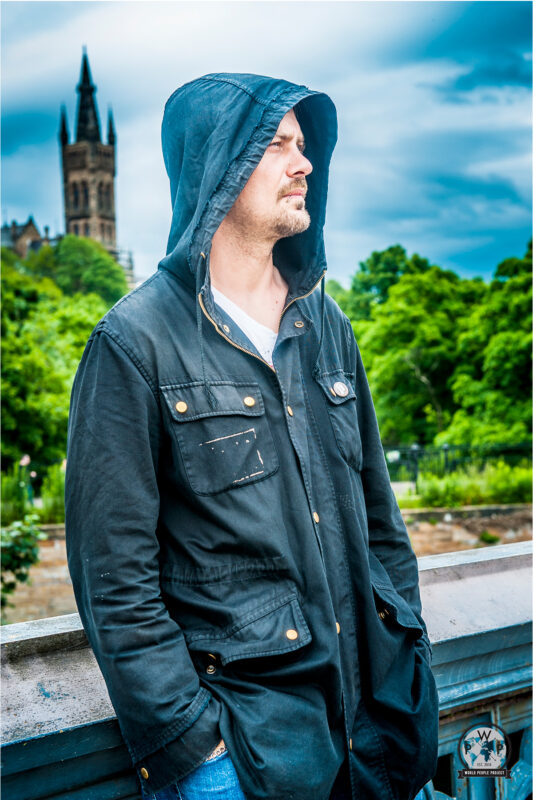 I am the fifth in a line of Bram’s. My father is called Bram, and his father before him, and so on, back to my family’s roots in the Netherlands. On my mother’s side, I am related to the Orcadian painter, Stanley Cursiter – he was my great grandfather.

Provenance:I was born in Buckinghamshire, in the south of England, but grew up in Edinburgh. I consider myself Scottish – my family origins are Orcadian, lowland Scots, Welsh and Dutch. No English relatives for generations. But because I spent my first ten years in England and was born there, I am often accused of being English – and my accent doesn’t help!

How long have you lived in Glasgow? I moved to Glasgow in 2012 to study, and stayed for the chip rolls. No, seriously, I left Edinburgh because it felt culturally impoverished compared to Glasgow. There just isn’t as much going on, year-round, as there is in Glasgow. It’s been beneficial – since moving through I’ve played more gigs, and found more opportunities for collaboration. Glasgow is never boring.

Occupations: I have been self-employed / freelance, for the last 18 months and I am finding that it suits me much better than working for a company. I’ve always struggled with dayjobs, and have been everything from a cocktail barman to a college tutor; from an IT specialist to a full-time journalist. None of it stuck, and I’ve never earned a great deal from any of it. But writing freelance, and doing whatever else I need to do to make ends meet, is working out well for me – I like being my own boss, choosing what projects I want to work on. I actually believe it’s far more rewarding, and wish I’d had the gumption to do it years ago. Most of all, I enjoy being paid to write. Luckily, the size of the cheque doesn’t seem to affect my satisfaction that much… In 2015 I had a stage show, EXNIHILO, at the Edinburgh Fringe Festival as part of SHIFT/ Collective. It was well-reviewed and I followed it up with a poetry collection of the same name, from my own imprint Weaponizer Press. Currently working on a new EP, hopefully due for release before 2017.

Passions and Interests: I’m not ‘the best’ at anything! My chief skill is communication, I guess. I am good at communicating ideas, whether that be through writing, music, or education (I do a lot of workshops on performance and writing). It’s what I hope to be able to make a living from, in one way or another. I am passionate about telling stories. I’ve always been fascinated by narrative, by character, and by ideas. These are endlessly fascinating to me, as they are to most people… I suppose the difference is I feel compelled to try and understand the clockwork, the physics of these story engines. That’s behind everything I write and perform.

What do people know you for? I guess I am best known as a poet and performer. I won the Scottish Slam Championships in 2015 so a few people know me from that, but have been putting on shows with Black Lantern Music, Chemical Poets and others for the last ten years, almost. I hope people know me from that, anyway, and not from some other nefarious activity I’m involved in but would rather keep quiet…. perhaps people think of me as “that stoned guy at the back of the gig”? Damn, I’m paranoid now.

Thoughts on Glasgow? A second chance, a vibrant cultural life, a brutal frankness and honesty, an open and friendly welcome, a hedonistic whirlwind, and after four years here… home. I love the people, the culture, the food, the music… everything except the football. That, I just don’t understand.

People often ask me how I find all the interesting characters I feature in the World People Project. Sometimes it is just a case of someone telling me that I should meet so and so, they are really interesting. Thus I heard about Bram E. Gieben. I first met with Bram when he was organizing music choices for The Arches – one of Glasgow’s best-loved venues; a nightclub that shows live theatre and music. To the dismay of many Glaswegians it was closed due to licensing issues. The following year I saw him perform his poetry at a club on Sauchiehall Street. I am an aficionado of slam poetry and spoken word: a multitude of topics expressed with vigor, passion and ardor. For the interview we met at the University Café on Byers Road for a chat, and then continued conversing as we looked for an interesting location for the portrait. This portrait shows the iconic tower of Glasgow University in the background.

If you enjoyed reading this conversation with Bram E. Gieben please feel free to send me an email, I always love to hear your thoughts and comments.
Tallulah can be commissioned for all types of portraiture, contact her to discuss further.