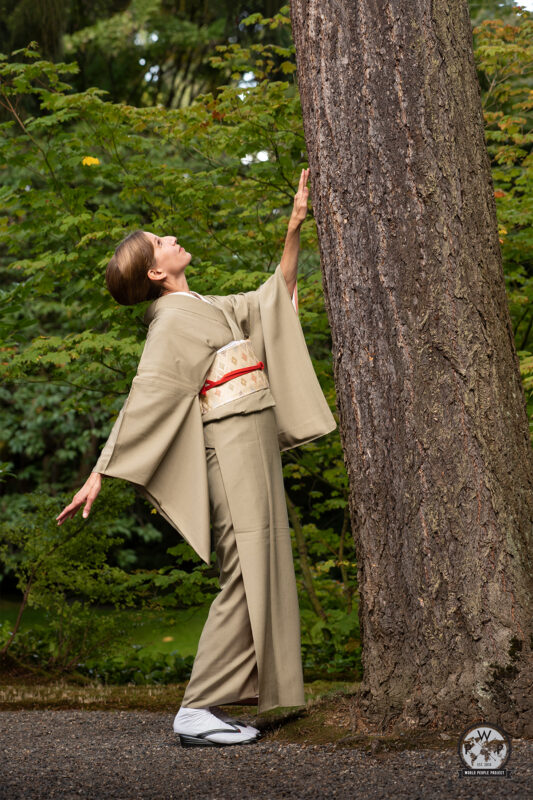 My name: Fujima Sayū is a Japanese dance name given to me by my first teacher (sensei) Fujima Yūko (1929 –2003). It is like a degree and designates me as a professional dancer of Nihon buyoh/kabuki (classical Japanese dance). In the Fujima School when a teacher feels that a student is ready they contact the head of the school and arranges to have the student included in the next natori (name-taking) ceremony, in which the student is made part of the Fujima lineage of artists extending back to the early eighteenth century. We all hold the “family’ name “Fujima” which literally means “Wisteria” + “Space/Room” 藤間。“Sayū” 左由 is a name created by my teacher and includes a Chinese character from her name Yūko (由子) which marks me as part of her artistic family. Sayū literally means “left” and “freedom” though no political connotation was intended! It is actually a bit of an in-joke in that the word “sayu” is also a movement pattern in Noh theatre, which I also studied. I am told the general feeling about the name is one of simple elegance – which is an aesthetic I strive for.

How long have you lived in Vancouver? I was born and raised in the East End of Vancouver. I lived elsewhere for many years and returned in 2004.

Occupations: I have been performing on stage since I was five. My first professional job was as a dancer-actor at the Theatre Royal in Barkerville –performing as the heroine in a melodrama and dancing in a vaudeville review. I also spent a season in Whitehorse in the Frantic Follies as a can-can girl and a singer wearing plenty of velvet and feather boas. I moved to Toronto where I got a BFA in Theatre Performance from York University and worked as a freelance actor, choreographer, and director. I’d always wanted to go to Japan, and when my mother died, I decided to take a year away from Canada and move to Tokyo. I ended up staying for seven years studying noh Japanese theatre and Nihon buyoh Japanese classical dance, teaching acting, and running a theatre company that created bilingual collaborative shows. I also worked as a voice-over artist, voicing newscasts, video games, and TV; I was one of the English voices on the original Iron Chef – one of the best jobs ever! I left Japan to pursue my MFA in Directing at the University of Hawaii, after which I returned to Vancouver. I am currently the Artistic and Managing Director of TomoeArts, a dance/theatre company that specializes in interdisciplinary and transnational work. I am also working on a Ph.D. researching feminist and avant-garde theatre, specifically the work of Kishida Rio. I love total theatre and believe that human beings need metaphor, image and story to live fully.

Passions and Interests: Total theatre (the stuff with dance, music, and spectacle along with the story or characters), hiking in the West Coast woods, sailing, communicating between cultures and disciplines through art or anything else that works.

What do people know you for? Being super tall, having lived in Japan and loving Japanese art and aesthetics, being a performer since I was a kid, the fact I almost always wear scarves. Doing difficult things – rather than taking the easy route (I’m kind of a masochist in that I make choices based on “what I can learn”)

Thoughts on Vancouver? My hometown. I love the closeness of nature, the concern of Vancouverites for trees, the cherry/sakura trees, coffee & sushi, the seawall, the seashore, the old roller coaster at the PNE. I dislike the fact the city can be so complacent about important things, and the fact it is getting so expensive to live here and the old neighbourhood feel in some places is being lost. I also hate some of the monster houses being built in the city…unbelievably ugly and ridiculous. Still, the fact is you can see world-class theatre or go to a fabulous art gallery one day, and then have a bear in your backyard the next. Vancouver is heading towards being the perfect balance of world-class urban centre and a place of nature. I don’t think it is quite there yet but I want to be part of that journey.

It seems passions and interests ebb and flow in my life. When I was living in Tokyo one of my first projects was photographing Nihon buyoh Japanese classical dance, I had met a dancer who invited me to their performances and I also took a beginners class in this dance form. I have always been enraptured by kimonos. Photographing the elegance of the dance, the subtle movement of a wrist, the use of the kimono sleeve and fan to express a feeling. The portrait of Colleen was taken at a private Nihon buyoh performance outdoors in the magnificent Nitobe Memorial Gardens. She is wearing a kimono, with an obi (sash) with white tabi (socks) and zori (shoes). If anyone is interested, there are Japanese hair salons in Vancouver where they will dress you in your kimono and style your hair.

If you enjoyed reading this conversation with Collleen please send me an email, I always love to hear your thoughts and comments. Here is a link to Tomoe Arts website and through it you will find unique Japanese dance events. Colleen also teaches classes in Nihon buyoh
Tallulah can be commissioned for all types of portraiture, contact her to discuss further.