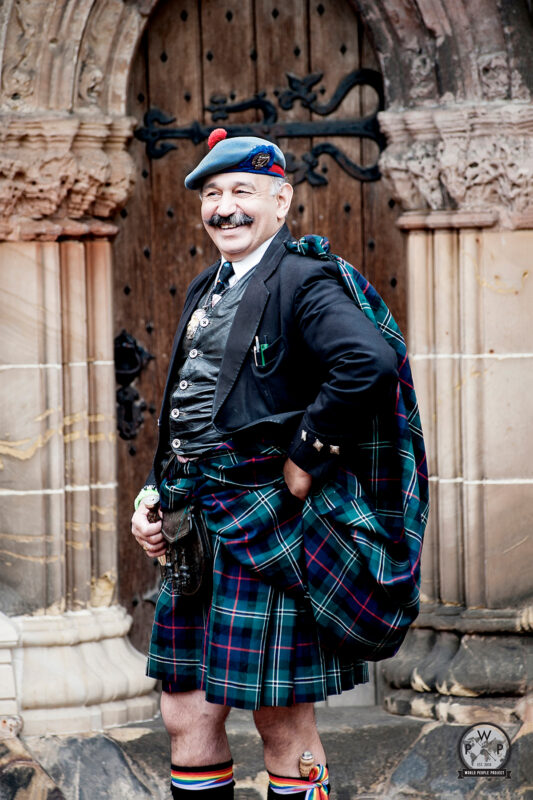 The English spelling of Domhnull is Donald. The Gaelic name Domhnall means ‘ruler of the world’, composed of the old Celtic words ‘dumno’ (world) and ‘val’ (rule). This was the name of two 9th-century kings of the Scots and Picts.

Age: I was born in the summer of 1959. My mother said it was a very hot summer, and she was forced to stay inside.

Provenance: I was born in Hammersmith, London. My mother was working as an artist’s model at that time.

How long have you lived in Edinburgh? I have lived for 55 years either in or around Edinburgh in such places as Kinghorn, Gilmorton and Loanhead, which is close to the world-famous Rosslyn Chapel.

Occupations: My mother was one of the biggest influences on my life. She was very artistic but strong, and it was her way or the high way. I started my life in the arts as a dancer studying ballet; I loved it and wanted to take it up professionally. I started a three-year dance program in Edinburgh: Highland dancing, Scottish country dancing, tap etc and was all set to go on a tour to Iraq and Greece, but my mother became very ill and I had to give it all up to look after her. I was a carer for my mother for 17 years. In between looking after my mother, I went back to the arts; at high school, I had been quite talented at making things by hand, and this eventually lead me to take a Higher National Diploma in jewellery design and business studies at North Glasgow College in Springburn. At one point I had a job working in retail for the store Toys R US; I hated every minute of it. I now work at home making silver jewellery. I did have a store in Edinburgh, where I designed and sold jewellery with a partner, but increasing rents and such made it difficult to continue. I use a lot of silver and semi-precious and precious stones, inspired by natural forms, human forms and religious artefacts; I have my own individual style. A few years ago I became a sacristan at Rosslyn Chapel. Before I became a sacristan I attended a service at the chapel. The sacristan prepares the altar for service and I was coached by a previous sacristan who was having difficulties carrying out the duties due to age and illness. He stepped down and I was asked by the Father if I could take over. It has become a large part of my life.

Passions and Interests: A film that I watched and which resonated with me was ‘Pride’, a 2014 film based on a true story, where gay and lesbian activists raise money for the families who were affected by the British miners’ strike in 1984. Like life, it was funny and sad at the same time and not so long ago it was illegal to be gay and one was easily beaten up. My house is full of my treasures and passions: dolls, religious dolls, religion. I keep the Torah, Bible and Koran side by side on my bookshelves. History, art books, fashions, dolls, highland dress, it is easier to talk about what I am not interested in. I am a big fan of Christmas and have a whole cupboard full of Christmas decorations. It might be hard to find a person who can outdo my Christmas decorations.

What do people know you for? I can be childish at times. I can do odd things and have a sense of humour and the ridiculous. Slightly irreverent about religion; life is a joke. My grandmother’s thoughts on being eccentric: she would rather be considered insane than sane. People who are sane can do such insane things, like start wars.

Thoughts on Edinburgh It’s a historic city. It’s a nice city to visit, with lots of things to see and do. During the Edinburgh Fringe festival, it has a buzz to it. You have the same buzz at Christmas time too. I love the history, the architecture, all of it, more than a thousand years; perhaps older than that. There is a cacophony of different styles of building: from medieval to Victorian through to modern. It has altered over the years. Edinburgh is quite a small town and slowly the outlying areas are becoming part of Edinburgh.

I met Donald in a cafe in Glasgow and his outfit and style really intrigued me. I thought he looked magnificent with his kilt, but I could see a bit of humour in his style. I approached him and somehow we arranged for me to visit his home studio, which is near Edinburgh. I took the train from Glasgow to Edinburgh and Donald picked me up. I have to say when I got to his car, the backseat made me double look: it looked like there was a child (a very large doll) next to a religious statue of the Virgin Mary. I think it was supposed to ward off the parking people. We drove to his home, which is a Scottish semi-detached council home, but upon entering a visual feast; it is like looking into the inner workings of his mind. Donald only wears Highland dress; his silversmithing is done in the kitchen and back garden. After chatting and seeing him work on some silver with a blowtorch in the kitchen, It was time for Donald to take me to Rosslyn Chapel for a private tour. It was very special and that is where we took the portrait of Donald.
I thought I would include some extra information on Donald’s outfit from a collector of Donald’s silverwork:
Mr Dean looks quite splendid in the Garb of Old Gaul. That’s the belted plaid he’s wearing, the 18th Century great kilt. You lay it out on the ground and roll yourself up in it then fasten a belt around your waIst. The bottom half forms a skirt and the top half is left free so it can be pulled up over your head in a storm.

I think Mr Dean’s using the very 20th Century LGBTQ rainbow colours as stocking flashes is a fabulous flourish.  His bonnet badge is the Rose clan hat and harp with the motto Constant and True around the strap. His kilt pattern is ancient hunting Rose.

He’s wearing a silver and ivory medallion of what looks like the face of the Green Man with oak leaf hair and beard which I guess is his own work. There are several carvings of the Green Man in Rosslyn Chapel.

I like his air of the worldly-wise but not weary time traveller, a lord of the pen and sword, or in Mr Dean’s case, the dirk and the biro. It wouldn’t surprise me if he had a sonic screwdriver in his sporran.

It’s a deep subject I’m not versed in but I think his Rose related regalia is connected in some way with Rosslyn itself and the old rosa templum stories.

Maybe this is stuff you know already Tallulah but I thought I would just set down in writing what came to mind looking at the photo and what emerged from my looking into it.

If you enjoyed reading this conversation with Domhnull please send me an email, I always love to hear your thoughts and comments.
Tallulah can be commissioned for all types of portraiture, contact her to discuss further.