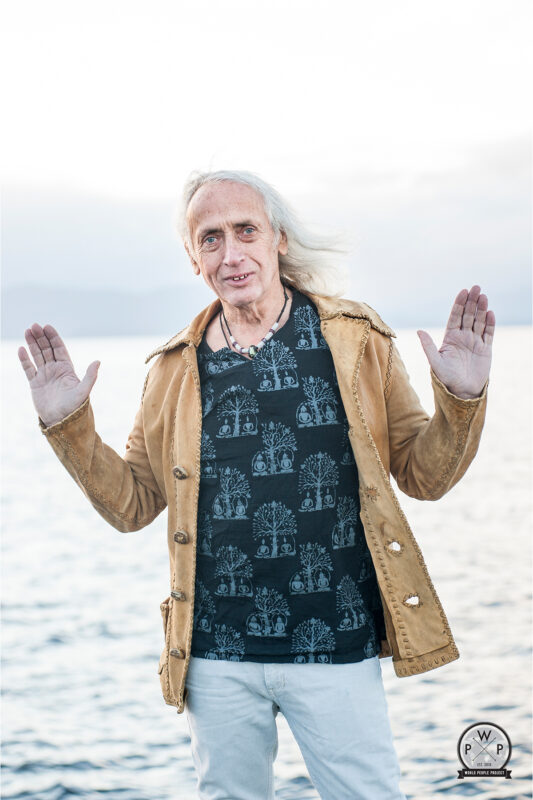 My given name is Claude Stephan Emile Dutheil. Stephan was my grandfather’s name on my mother’s side; she was from Siladice, Slovakia. Emilie is from Emilie my grandmother on my father’s side, via Paris, France. Dutes is a nickname.

Provenance:I was born in Versailles, France. There are lots of photos of my mom, sister and me as a baby in a carriage in the Palace of Versailles gardens. My dad left France because he did not want to go through another war, so we moved to Halifax, Nova Scotia.

How long have you lived in Haida Gwaii? I first arrived in 1970. I came with a friend whose mother worked in the hospital in Queen Charlotte City. I felt that the islands called me. I moved around the islands a lot, before finally settling in Tlell on the east coast of Graham Island.

Occupations: My parents and I were immigrants, and moving to a small industrial town had its challenges. We were called “displaced people”, or “DPs”, which was a derogatory term and could easily come with a beating from the locals. I had a paper route and in the summer went raspberry picking with my mother. My father got a job with General Motors and eventually became the General Foreman. My dad and I liked nature and we would walk the woods, collecting stones. My dad built machinery that I could start cutting stones with. At the age of 13, I entered a lapidary art show and I won for best stone. The late sixties and early seventies caught me and I veered away from the strict thoughts of my parents and joined the burgeoning counterculture. I tripped the light fantastic, saw Jimi Hendrix, at the Cobo Arena in Detroit, playing the guitar with his teeth, pretty wild times. I was at the University of Winsor, which had a radical movement – we were anti-war, we took over the university, abolished final exams. Through university I did a lot of work with leather, using my hands to make money. I eventually graduated from creative writing, but skipped graduation. When I arrived in Haida Gwaii, I did whatever I could to survive: fishing, unloading sphagnum moss from trucks for landscaping – a gruesome job. Learning how to use a chainsaw, led to building houses. I spent several years where I lived in the bush on North Island (Langara). I learned to hunt deer, beachcombed and fished – really got strong physically. I opened the Crystal Cabin over 25 years ago, taught myself how to make silver and gold jewelry. I created the Tlell Stone Circle, which is an outdoor exhibition of Haida Gwaii’s geological past. These stones, arranged in a medicine wheel, mark the intersection of two harmonic leylines and an entryway for light to enter the universe.

Passions and Interests: Spirituality is a big passion and being creative. After I divorced, I had to re-find who I was. I went to an ashram in India to realize we are all connected. Our consciousness is universal, but the mind changes the translation of that and it holds us. Interestingly I wrote an essay on that same subject in university, so full circle.
Stones! Every human has picked up a rock. Shamans have used crystal for healing. The Egyptians used stones for adornment. Stones picked me. I don’t like paperwork at all – that is not a passion of mine!

What do people know you for? I would say for helping people. For always being there, a rock-solid, reliable person who does not hold grudges and who is totally accepting. I have friends from all the different sectors of Haida Gwaii. One island all connected by the same consciousness.

Thoughts on Haida Gwaii? Haida Gwaii has a high-energy vortex. It is placed on natural leylines, which is why people come here and feel something when they leave. I believe we are all called here for some reason. Many people from all over the world come to Haida Gwaii. It’s the centre of the Haida Universe – I love the people, the land, and the nature. The air is so fresh – let’s keep it that way.

I traveled to Haida Gwaii to be enthralled by the natural beauty and to meet people who live there. I met Dutes at his Crystal Cabin store in Tlell. He’d just returned from a trip to Mexico and was tanned and relaxed. The portrait was taken at the nearby Rainbow Dock. It was February, so days were stormy and short and we just managed to capture Dutes before the sun went down. I hope you’ll agree that Dutes appears at one with the simple nature of his surroundings. The power of the natural world shone through Dutes and it was a privilege to have crossed his path in such a special place.

If you enjoyed reading this conversation with Dutes please feel free to send me an email, I always love to hear your thoughts and comments. On a poignant note, Dutes passed away to pancreatic cancer in February 2018. His two daughters will continue to run the family business Crystal Cabin and advocate for Haida Gwaii. In the two years after his diagnosis, (which must have been shortly after the portrait session) Dutes spent his time having fun, connecting with those he loved and being creative. To share his knowledge of agates and the geology of Haida Gwaii, Dutes wrote the pocket guide, Agate Collecting with Dutes, which was published in 2017. I strongly suggest going to visit the Crystal Cabin Gallery in Haida Gwaii, where the spirit of Dutes lives.

Tallulah can be commissioned for all types of portraiture, contact her to discuss further.