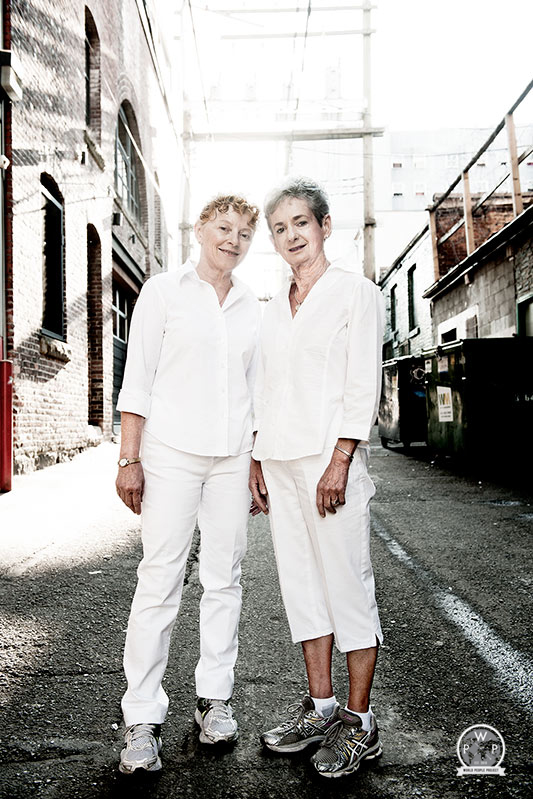 How long have you lived in Vancouver? I have lived here since 1974

Occupations: As a little girl my mother bought me a nurses set; until then I had thought my only career option would be a nun. I trained as a registered nurse, first in Dublin then later in London, graduating in 1969. I worked in Saudi Arabia for three years, I didn’t want to return to Ireland and was convinced by several smart English nurses I worked with to move to Vancouver.

Passions and Interests:  I love cooking. I am a foodie and have gone to many cooking classes over the years. French cuisine is my favourite — all that butter and cream. With food comes a desire for collecting wines. I also exercise; most mornings I go to the gym at 5.15, to chat with the dear friends I have made over the years as much as go on the treadmill. The most consuming passion for me is my work in the Downtown Eastside of Vancouver.

What do people know you for? My work in the Downtown Eastside, while close friends and family know about my cooking and wine collection.

Thoughts on Vancouver? Vancouver is home for me now, but my heart belongs to Ireland. I still return to Ireland as often as possible; my 94-year-old mum lives in Limerick in her own home and she still hangs her washing out every day regardless of the weather. I am not a rain lover, but the mountains, the ocean and the lifestyle make up for the Vancouver weather.

How long have you lived in Vancouver? All my life.

Occupations: My mum was a nurse; she trained at St. Paul’s Hospital. After graduating from high school I decided to become a nutritionist, but at the last minute changed my mind and signed up for nursing. I am a registered nurse and graduated from the Vancouver Community College School of Nursing in 1973. My early years of nursing were stressful, as I realized I did not like the hospital environment. Eventually I found my niche: home-care nursing.

Passions and Interests:  My children and family are very much a part of me. I love the surf, the waves and walking along the shore. A few years ago I discovered boogie boarding. Another water passion is snorkeling in warm waters with brightly coloured tropical fish and sea turtles. My work with Evanna Brennan in the Downtown Eastside of Vancouver is very important to me.

What do people know you for? I would think that most people know me for my work with Evanna, friends would know about my family and my love of surf and snorkeling.

Thoughts on Vancouver? Vancouver is deeply rooted within me; my family live here and my dad, who is now 96, still lives in the house he and mom bought in 1953 shortly before I was born. My dad and I both graduated from Kitsilano High School. In my lifetime I have seen Vancouver change from a much smaller and quieter place to the bustling city we now have. I love Vancouver and its oceans and mountains.

We joined the Vancouver Health Department in 1979 as home-care nurses. In the 1980s we were posted to the Downtown Eastside and began working together. This was before HIV or the open drug scene. We saw mostly elderly retired loggers and miners living in the single room occupancy hotels.  Cheap cocaine appeared in the Downtown Eastside in the 1990s and the number of HIV-positive drug users skyrocketed to epidemic proportions. We were challenged to provide care to marginalized, younger folks and the mentally ill who were dying of AIDS. We adapted our nursing practice by embracing the new concept of ‘harm reduction’ to meet the need despite much opposition from our own medical community. When antiretroviral medications became available in 1996, we developed a model of care to support our patients. These life saving pills, in order to be effective, need to be taken every day without fail. This is not easily achieved in a drug-fuelled chaotic environment where violence and trauma are a daily occurrence. After 32 years of working together, we retired two years ago. We now work part time providing nursing service to shelters in the Downtown Eastside. We are also involved with a University of British Columbia nursing research project delivering an Elder Led intervention to Aboriginal women who have experienced partner violence.

We continue to present our model, experiences and stories to medical communities in Canada, the United States and Europe. Our next trip will be to Saskatoon. The Prairies is experiencing an HIV epidemic among young First Nations people and there are no services such as needle exchanges or easier access to antiretroviral medications, all which are considered essential in Vancouver.

I have admired Evanna and Susan ever since the first time I saw them working together at a drop-in centre for sex workers. It was the compassion and tenderness they showed to isolated, vulnerable and unpredictable clients. It was amazing watching them work as a team, a dance of the right words, needles, bandages and gauze all performed in perfect unison. The years passed, and I encountered them again at a farewell party for Jim Green at The Cultch. Green was the pair’s last patient in the Downtown Eastside before they retired. When I met them to discuss this project and the portrait, it took me 30 minutes to realize they were wearing exactly the same coloured top. They laughed, and admitted that it happens all the time. Their portrait was taken in one of the most active alleys for drug use in Vancouver. They wore white, which is a colour traditionally worn by nurses — a stark contrast with the grey grittiness of the Downtown Eastside.