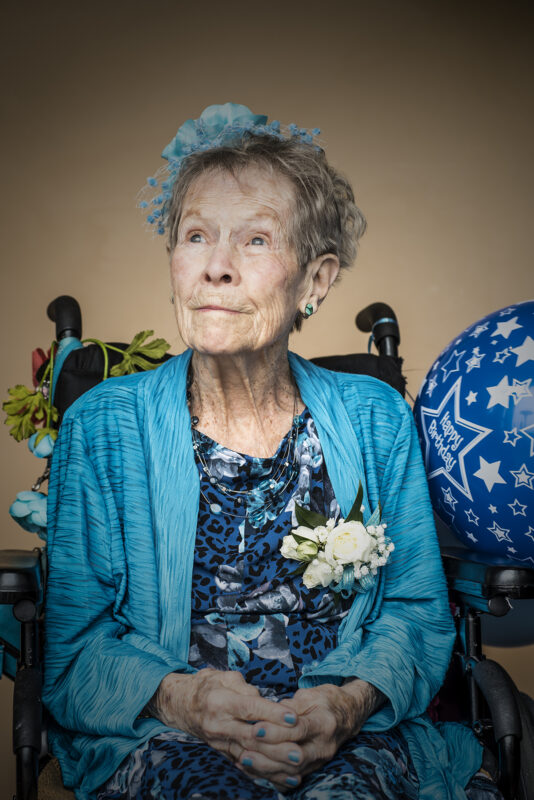 Age: I was born April 5, 1918. In November of that year, the Spanish flu epidemic hit Vancouver, but I was lucky to enough to escape it.

Provenance: Vancouver – a hundred years ago it was a very different place.

How long have you lived in Vancouver? I have lived in Vancouver most of my life with a few years in Halifax, Nova Scotia in the early 1940’s where I joined my husband as a newlywed. I sold my home at 27th and Cambie to move to Delta View (retirement home) five years ago.

Occupations: I started work in my early twenties at Office Overload; it was a Girl Friday secretarial type job you did what needed to be done. At that time a lot of women didn’t work – it was the man’s job to bring home the money. I did accounting for Fraser Valley Milk Producers. When I moved to Nova Scotia I learned how to drive a tractor and milk a cow! After the war my husband (George Allen) started his own photographic company Allen Aerial Photos Ltd. He was at the forefront of aerial photography at that time so his services were very much in demand, he photographed the Second Narrows bridge while it was being built, after the bridge collapsed his photographs were used by many publications and work photographing constructions sites, mines grew. I ran the business with my husband. Originally we had a darkroom in the basement of our apartment building on Main Street, Vancouver so we would develop and print the images. I dealt with the bookkeeping, sales and customer service – I am good on the phone. In the early years before the children I would go on assignments with George to photograph aerial shots of the mines up in Northern BC – sometimes he was required to photograph inside but I was not allowed as women were considered unlucky by the miners at that time.

Passions and Interests: Love of life shared with friends and family. I have three grandchildren, two great grandchildren and one more great grandchild due to be born before the end of 2018. I joined the Lion’s Gate Camera Club (LGCC) in 1981 and that has been a big passion of my life. My first camera being the Pentax 800 which I would shoot with black and white film. Developing it and the printing was fascinating as you would never quite know what would come up on the print. I loved the suspense. A very fond memory is travelling to Kenya and Tanzania and taking photos of the scenery and the animals on black and white film. I was honoured with a Life Membership with the LGCC although I hung my camera up a few years ago. My husband and I used to have a cabin near Yale, BC where we would enjoy panning for gold.

What do people know you for? These days it would be for reaching the age of 100 and my love of photography.

Thoughts on Vancouver? Its home, although its quite rainy.

I first met Hilda Allen or Mrs Allen at a celebration for her 100 birthday party. I took Hilda’s portrait in a hallway, it was a rainy blustery day so outside was not an option. I used window light to illuminate Hilda. I was a bit late for the party as got I got caught in a traffic jam on the highway and was rather grumpy, but when I met Hilda – the feelings vanished and I was caught up in the love in the room for her. It was an honour to photograph a fellow photographer and someone who has survived a whole century with passion.

If you enjoyed reading this conversation with Mrs Allen please feel free to send me an email, I always love to hear your thoughts and comments.
Tallulah can be commissioned for all types of portraiture, contact her to discuss further.