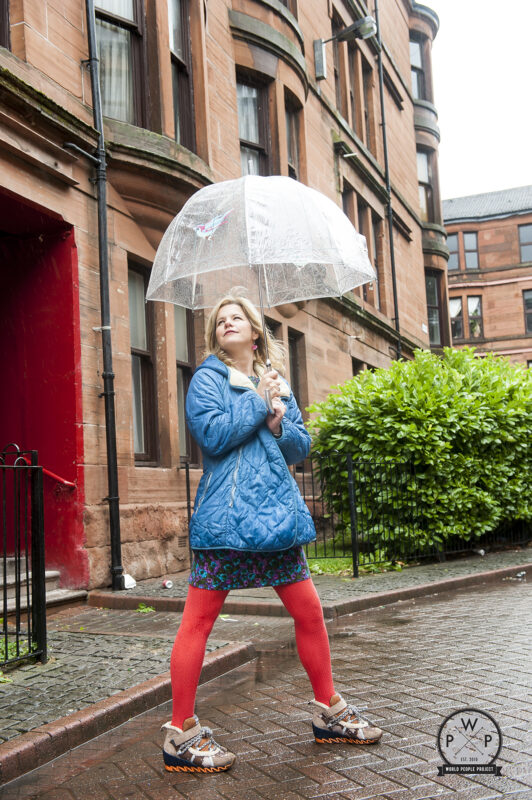 Ingrid is a Scandinavian name; at school in Orkney there were six Ingrid’s in my class whereas on mainland Scotland it was a rather unusual name. Orkney originally belonged to Norway. In the 1400s Orkney was handed over to Scotland in lieu of a dowry for Margaret of Denmark.

Provenance: My parents met in Orkney and eloped to Oban, I was born in the West End of Glasgow, lived in Orkney until I was six, then moved to mainland Scotland.

How long have you lived in Glasgow? My return to Glasgow was in the 90’s.

Occupations: I graduated from Gray’s School of Art in Aberdeen. After art school I travelled a bit: Australia, Fiji and Malaysia to name a few, picking fruit, working in bars, dressing mannequins, jobs to keep the money flowing. After the travels, Glasgow is where I wanted to be; it inspired me with its lust for life. At that time it was hard to get a job with an illustration company, so I started Inky Designs, which I still run today. I make alternative greeting cards, which supply high end gift shops and art galleries across Scotland. The first designs included leopard print, pink cowhide, suggestive words and Santa Claus wearing women’s underwear and were done by hand. Currently I have a range of Scottish themed cards, which are created using a combination of sketches, photoshop and illustrator. Due to my art background and interest in social enterprises I got a job with Linthouse Housing Association to run their art project, Linthouse Urban Village (LUV) a regeneration art project to revitalize Linthouse in Govan. I was the project coordinator working on creative initiatives such as a revitalization project which hired artists to work with locals to redesign dilapidated shop fronts, a community art gallery, café, film club, youth group, sewing project, art classes and the LUVely cook book, filled with multicultural recipes by asylum seekers and refugees. This experience inspired me to take on a postgraduate degree in Social Enterprise at Glasgow Caledonian University. I now work part time for The Robertson Trust, which is the largest independent charitable trust in Scotland.

Passions and Interests: People: vibrant, interesting, inspiring people, finding a new artist or friend who inspires me, people who speak their mind, all the selfless volunteers, I meet in my work and life seen from the simple perspective of a child. Nature: the outdoors, big skies sunny or not, Orkney, the sea, you can’t beat the Moray coast, cycling through Mugdock country park, watching sleeping dogs and dogs running around in wild spaces with happy delight. Art: poetry, naïve drawings, design, drawing buildings, people’s faces, printmaking, a good world cinema film that makes me think and feel I was a part of. Life: an afternoon nap, chocolate, Nairn’s Oatcakes, shellfish, especially crab, the first glass of wine, or fizz, of the evening. Future possibilities I could go on and on.

What do people know you for? When I worked for the Linthouse Housing Association, most likely the face of LUV. My friends know me for my sense of humour and occasional immaturity, but someone they can trust and be honest with. I might also be known as a non-conformist, an occasional rule breaker.

Thoughts on Glasgow? I love Glasgow. When I came back after all those years I felt at home: the humour, the excitement, the chat, and the banter. No matter if you are in Asda or a hospital, someone will always speak to you. The ability to see someone as a fellow human, someone you can talk to without a formal introduction is an unique and special trait of Glasgow folk. The wild spirited ways can become a bit twisted with alcohol, and too often drunken aggression can spill out on to the streets. More affluent suburbs take themselves a bit seriously, perhaps lacking the Glaswegian humour. Edinburgh is beautiful but Glasgow is full of charismatic and interesting people. People do make Glasgow. I love Weegies.

Ingrid is full of light and energy and you feel her zest for life immediately. We decided that the shoot would be in Govan with the red brick of the tenements as our backdrop. Govan is where she worked for the LUV project a few years back. It was a very rainy day, we sat in the car for a while, hoping for a change in the weather, the rain did not stop, so we just went ahead with the portrait. There were more than a few curtains twitching as we proceeded with the shoot, between two tenement buildings.