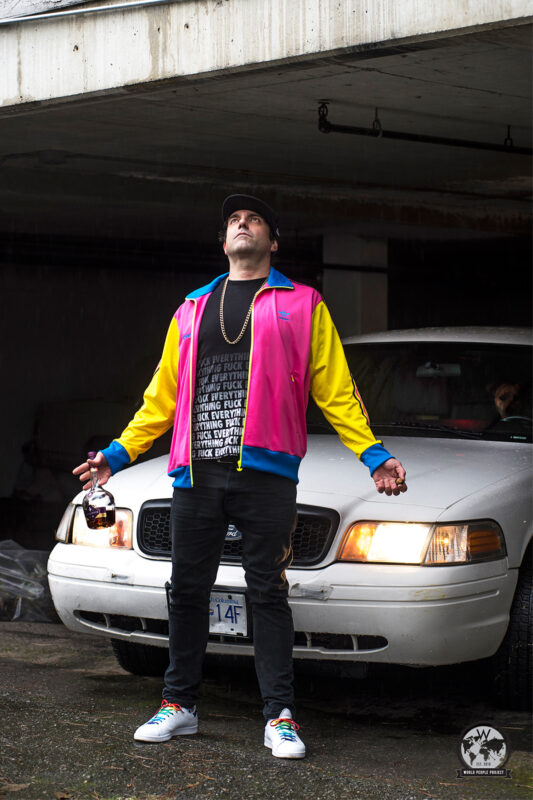 My mom claims I’m named after Jean Paul Sartre but I suspect I’m named after the Beatles. Apparently my dad thought it was stupid since no one in his family had spoken French since the 1600s. He said we might as well name me “Chicoutimi Bob”.

Provenance: Born in Victoria, went to college in Nanaimo, bought a house in Lake Cowichan, all places on Vancouver Island. Lived in Toronto for a bit…

How long have you lived in Vancouver? I’ve lived here just over three years, but being from the island this was the nearest REAL city so I’ve spent half my life here, playing in bands, having art shows, DJ-ing, partying and working and hanging out with friends.

Occupations: I have always been an artist but it wasn’t much of a living until I moved to Vancouver. I grew up just down the road from Butchart Gardens in beautiful Brentwood Bay, which seemed like the most boring place in Canada. As a young teen I fell in love with punk. Not just the music, the culture, everything. So much so that I quit school, left home and spent my days and nights hanging out at Victoria’s “Piss Alley” drinking, panhandling, and sniffing glue. I had a double mohawk, ripped clothes, anarchy symbols, combat boots. The full cliché. Of course, that lifestyle doesn’t lend itself to magnificent careers – at least not way back in 1985. Luckily I got involved in the music scene and playing in bands. Most of them didn’t amount to much. The only real notable one was HUMP. Our claim to fame was opening for WEEN and getting the club shut down for peeing on the audience. After that I started to grow up a bit. I went to art school and had a few careers of varying success – dope growing, wedding DJ and the film industry. I still have my union membership in the grip department and work once in a while. Although it’s gruelling and a bit mundane, it can be worth it just for the camaraderie. It’s cool hearing the old guys telling stories of brushes with celebrities and on- set cocaine abuse. Now I spend most days painting and make a modest living. There are a few galleries that sell my work and some loyal patrons who give me commissions. I work in my home studio in Mount Pleasant. It’s a ghetto building with a nice view. It’s owned by notorious slumlords so it might catch fire or completely fall to pieces any minute but it’s cheap and its home. I listen to spaghetti western soundtracks or put on cartoons or an old episode Bonanza while I work. I find a lot of inspiration in that kind of stuff. Most of my work is inspired by cinema and the western genre. My next show is titled East meets West and it’s at Stockyards Gallery in Toronto.

Passions and Interests I’m pretty good at leisure – vacations, socializing, partying, eating out or hosting a night at my place, hanging out at the beach, nightclub or after-hours establishments and visiting friends. I’m good at friendship (I hope my friends agree). Taking care of my immediate family which really only consists of my girlfriend, my dog and my mom. I also love literature, and read a lot: William Faulkner, Cormac McCarthy and Philip K. Dick. Most of my wall space is dedicated to books and records. I also have a lot of coffee table books on art and film. It’s satisfying to have reference material you can touch and smell close at hand.

What do people know you for? Being charming obviously. Different scenes know me for different things. I am getting some recognition in the art community, I work hard as an artist, painting everyday, show my work a lot and go to art openings when I can. Whole swaths of people know me from the punk scene and/or rave scene. At the dog park everyone knows me as the owner of my handsome dog Frederick. At the public pool, I am known as the guy who reads in the sauna and shushes people.

Thoughts on Vancouver? Vancouver means civilization to me, especially compared to Vancouver Island. While it’s certainly not as cosmopolitan as Toronto or NYC, it’s still pretty cool. Some of the things I like about Vancouver – East Van, Mount Pleasant, old ladies doing tai chi in Queen Elizabeth Park, going swimming at the Kits Dog beach or Lynn Canyon. . It’s small enough so you can get to know everybody in your neighbourhood pretty quickly and still big enough to have actual city culture. Decent music venues and party spots: The Commodore, The Vogue, The Fox (although they really should have just kept playing porno movies), VAL and Open Studios. I like the street culture, junkies selling their weird garbage down in Gastown, graffiti on trains and tags in the streets. The fact that the main pollution you smell is actually weed smoke and the crows that commute from Burnaby and back everyday. That still trips me out…. What I don’t like: skunks, the Lululemon people, black Audis and Mercedes, hipsters slacklining in public, the putridness of Trout Lake. But whatever, there’s not much to complain about except the cost of living here.

Jean Paul (JP) is part of my extended family. His mum Sue was my Aunty Sonia’s best friend and they usually spent summer holidays together with their kids. It was many years before I met JP but he’s one of the most individual characters I know. JP has attitude, and his own unique perspective on many subjects. You might love or hate him, but he is loyal and committed – loyalty and commitment that includes his penchant for Adidas, a relationship that goes back to memories of his father and the boxer, Muhammad Ali. Currently, he has over 20 tracksuit tops, 20 pairs of Stan Smith sneakers and 10 pairs of Jeremy Scott high tops. JP has been creating art since he was a young one and has the honour of being kicked out of two art schools – surely a badge of honour for any self-respecting artists! This portrait was taken in the parking lot of his Mount Pleasant apartment.

If you enjoyed reading this conversation with Jean Paul please feel free to send me an email, I always love to hear your thoughts and comments. I strongly suggest going to JP’s site and having a look at all the paintings.

Tallulah can be commissioned for all types of portraiture, contact her to discuss further.