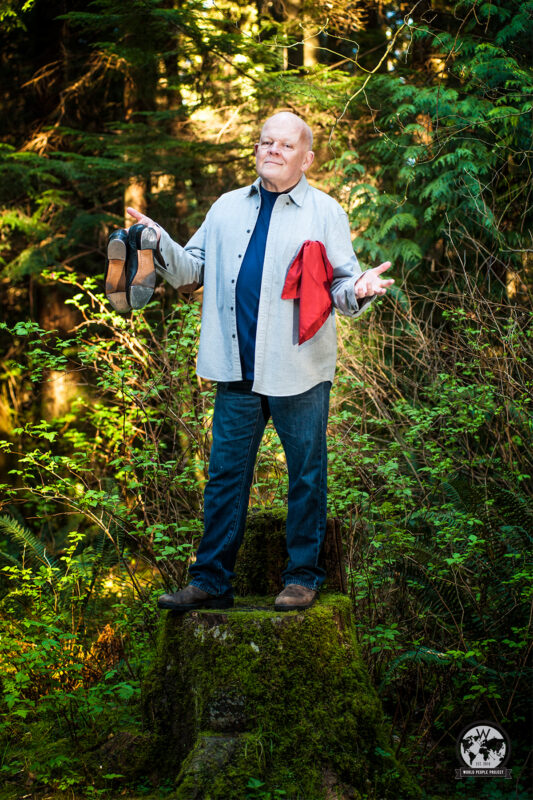 My middle name comes from my grandfather Earle, who built me a wooden platform on top of two logs in the logging camps so I could practice tap as a child.

Provenance: I was born in Klamath Falls, Oregon, USA. When I was three years old, the family moved to Idaho, where we mostly lived in logging camps north of Boise.

How long have you lived in Vancouver? I came to Vancouver in 1964 initially to work on the production of West Side Story at the Queen Elizabeth Theatre. I played the role of the character named A-Rab. Rehearsals were underway for about a week, when the singer/actress Charlene Brandolini who plays Rosalia arrived from another show in Montreal – she didn’t even have her coat off before she was asked to sing the ballad Somewhere – everyone was struck by her singing and I went up to her and said “You sing real good.” After rehearsals and three weeks of performing, I proposed to her on closing night. We had gone out only a few times times but I knew this woman was for me. We were married in Vancouver that same year. I continued to work in Los Angeles, and Charlene continued to tour with West Side Story. We danced on the TV show The Beverly Hillbillies together. We decided to make Vancouver our home in 1971.

Occupations: My main occupation has always been show business: singing, dancing, acting, choreographing, directing, producing, some writing, and teaching. My mother loved Hollywood musicals and would take my brother and me into town with her to watch them. Watching Gene Kelly in the film Singin’in the Rain (1952) inspired me to dance. I literally came out of the movie theatre and tried the dance steps down the road. My mother signed me up to take lessons at the Winger School of Dance in Boise when I was eight years old. I lived in logging camps during the week and on weekends I was taken to Boise for dance lessons. Eventually the family moved to Boise, and I would take about ten classes a week.

Eventually my dancing outgrew the Winger School of Dance, the teachers suggested that my mother set up classes for me at a school in Los Angeles. My father said we could do it but “If he is not a star in one month, he is coming home and he will be a logger”. We went to the first school where my mother had arranged the classes, but the tuition cost was impossible. On the way to lunch at the corner of La Cienega and Beverly Boulevards, we saw a placard “Gene Nelson teaching tap and jazz” (Gene Nelson was one of my idols and starred as Will Parker in the movie Oklahoma). It turned out to be Nico Charisse’s studio. We entered and I was invited to dance there and then and right off the top was given a school scholarship in ballet, but we were still short of money. At a nearby drugstore there was a sign for “Waitress Wanted”, and my mother got the job allowing us to stay the month.

It wasn’t long before I got my first job as a professional singing and dancing on the TV series-The Jack Benny Shower of Stars. I have been in six Elvis films, classics such as Hello Dolly with Barbara Streisand, Bye Bye Birdie with Ann-Margaret, Thoroughly Modern Millie, with Julie Andrews (I was the feature dancer who played role of the groom in the Jewish wedding scene), and Finian’s Rainbow with Fred Astaire (I had a cameo role dancing and singing.) I was one of the dancers in the film Marriage on the Rocks (1965) starring Frank Sinatra. During a break we were asked who knows the current dance crazes: the Swim, the Pony, the Jerk, the Frug, the Mashed Potato… I mentioned that I did and I was told on the spot that I had to teach Frank Sinatra the Swim. ‘How the hell do I do that?’ was what I thought. Frank was well known to be a great guy or a real asshole. ‘If I screw up here and make it hard for him, he could turn on me.’ My training with Nico Charisse came into mind. I remembered him saying there are a million different ways to get from A to B – find something that they can relate to, make them feel comfortable, make them look golden, Frank liked to box so I merged a very slow speed bag action into the Swim dance style, which he danced with his daughter, Nancy Sinatra in the film.

In Vancouver I continue to teach dance at Harbour Dance Centre. It has been for 35 years now and still going strong. I also teach at the Rhythm Room. I have directed and choreographed for Vancouver’s Theatre Under the Stars – a connection there led to a steady job selling and marketing heating and A/C equipment, which worked well with the flow of show business. I have become a faculty member teaching Theatre Arts students at Capilano University. Recently I’ve had a featured cameo role in the Disney movie, Descendants, I was a singing/dancing zombie on the TV series A Series of Unfortunate Events, and I just finished filming segments for another two TV series, Date My Dad as the dance double for Robert Wagner who is starring with Raquel Welch and Once Upon a Time as a singing/dancing pirate in a production number with Captain Hook, Snow White and Prince Charming. So life is still very very busy.

Passions and Interests: Other than performing, I have a deep passion for fresh water fishing (salmon, trout and bass), over the years developing skill and rhythm with the reel. I go to all the local rivers: Capilano, Seymour, Vedder and the Fraser . I grew up living in the woods and fished all the time as a young boy. The river and fishing is my church, my spiritual place. My family comes first no matter what. I love my family. For me Facebook has been a true blessing, I am now in touch with many of my relatives and their children as well as connecting with all the dancers and performers that I knew all those years ago. Every spring and fall in Los Angeles there are the Professional Dancer Association’s Lifetime Achievement Awards honouring all these gypsies, sometimes it is a star or sometimes it is a lifelong performer. I usually attend and meet with friends and it is as if no time has passed at all and you pick up where you left off 45 years ago.

What do people know you for? I am equally well known in Vancouver and Los Angeles. I would say I am very well respected in the show business world as a top dancer, as well as being very professional, never causing problems and with a great attitude. I must have learned this from my parents. A good friend in Los Angeles said the other day that everyone in the business wanted to work with me because “when God was giving out the jaded gene, you must have been home sick.” Perhaps people don’t know this but whenever I am about to go to stage I take a moment and think about all my teachers – Nico, Gene Nelson and Lucille Ball to name but a few. I honour them, my angels. It is impossible to get ahead in this business without the help of others.

Thoughts on Vancouver? Vancouver is my home, where I met my wife Charlene and where I raised my family. Vancouver is a beautiful place and it has grown over the years, unfortunately it has become so expensive, which makes it difficult for young people to afford a house. I am happy that it is so close to nature. I love the woods, and the trees are always calling me.

I adore and relish speaking to Jim. I am always learning something new and love hearing his tales about Hollywood’s golden age of musicals – Jim working on a film with Elvis or Jim teaching Frank Sinatra a dance move. When I first heard Jim’s own story it reminded me of a film – young, small-town boy goes to Hollywood and through some luck and hard work finds success. Jim is over seventy and has a tad of arthritis but his philosophy is ‘get out and “thump and bump”, the alternative stinks, gravity is going to get us one day, keep your spirit young, your thinking young. This is an impressive philosophy and one we could all heed. Let’s get our dancing shoes out. The portrait of Jim is taken in Stanley Park; I thought long and hard where to photograph Jim, and Stanley Park as a background is an ode to Jim’s beginnings amongst the logging forests of Idaho.

You can study tap with Jim at Harbour Dance, or The Rhythm Room, he teaches beginner lessons as well as more advanced classes and privates.

If you enjoyed reading this conversation with Jim Hibbard please feel free to send me an email, I always love to hear your thoughts and comments.
Tallulah can be commissioned for all types of portraiture, contact her to discuss further.