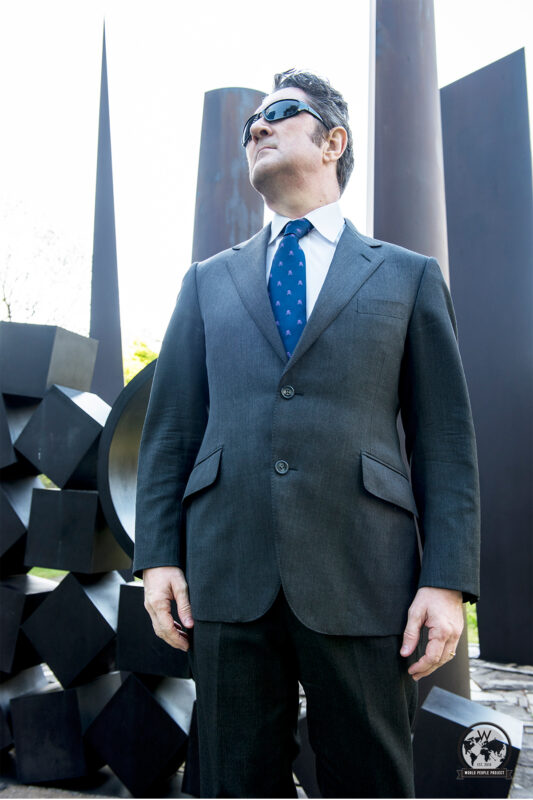 The name CATTON comes from Old English (Anglo-Saxon) before the Normans, comes from the word ‘catte’, which means ‘cat’. For a long time I thought it was French. It means what it sounds like: cat. I had people call me Catton a hot tin roof, Catman, etc .The name hints at some something mysterious but it isn’t. I’m named after a cat.

Age: I was born in October 1961, the same year that Yuri Gagarin became the first man in space. Is there a connection? Who knows? Yuri Gagarin was a pretty amazing guy.

Provenance: I was born in Cambridge, UK. When people hear the word Cambridge they think of the university with its historic buildings and lawns, but there were and still are some economically and culturally deprived areas: streets and housing estates that you would think twice about entering for fear of being attacked either verbally or physically.

How long have you lived in Tokyo? I first came to Tokyo in the early nineties. I looked for teaching jobs in exotic locations, and eventually found a teaching job in Tokyo. I had always been interested in Japan because of the Godzilla movies, and then the music of Ryuichi Sakamoto and Yellow Magic Orchestra. I started reading books about Japan – both non-fiction travel books and novels by Japanese authors such as, Yasunari Kawabata and Yukio Mishima. I have been back and forth and out of the country since then, but I now regard Tokyo as my home.

Occupations: My part-time job during sixth-form college was as a dishwasher in Jesus College, Cambridge. The contrast between High Table and Hall above, and me working in the basement, was very frustrating when I had developed a keen interest in literature at school, but was denied access to the university library. I decided to study literature at Leicester University and at that time started writing short stories. When I graduated from university I got a job writing for the What’s On In Northampton magazine. I worked on it until the magazine was closed down in the late eighties. I went into freelance writing while trying to pay the rent with a number of temporary jobs. One of the jobs I had was as a Psychiatric Nursing Assistant, which reflected my growing interest in altered states of consciousness (schizophrenia, autism and Multiple Personality Syndrome). Which has always been a strong element in my fiction writing. After a succession of temp jobs in offices and factories (and a notable time in a bingo hall), I left the nightmarish Thatcher economy in the UK and moved to Japan. These days as well as teaching I have written and published a few novels through the indie publisher Excalibur Books. My latest work is a young adult urban fantasy trilogy: “Sword, Mirror, Jewel”. The inspiration for this concept came when I realized that although many works of Western fantasy literature had been based on gods and monster from Greek, Egyptian, and Norse mythology, the rich and complex world of Japanese mythology has hardly been explored. Years of teaching in Japanese high schools and junior high schools went into the creation of Japanese-American teenager Reiko Bergman and her friends. I was inspired by the returnee and mixed-parentage students that I met in my career, and so the main character, being half-Japanese and half-American, has an outsider’s perspective on the screwy pressure-cooker world of Japanese education, making the whole thing accessible to a Western reader.

Passions and Interests: As well as being influenced by literature, I have also been inspired by music, art, TV, film, and graphic storytelling (the media formerly known as comic books). I started collecting Marvel and DC comics as a child – and I firmly believe they helped me to acquire reading skills at school and score highly in class because of their rich and eclectic vocabulary. As a teacher of literature, I have always insisted that manga, comic books and bande dessinée are a valid form of literature and deserving of the highest academic acclaim. In my teenager years, I started building up my vinyl collection, and learned to play guitar, because music had become the biggest passion in my life and playing guitar in a punk band was a way to get girlfriends. Things didn’t work out like that, but my musical passion led me to countless gigs, acid house raves, Goa trance parties, and the Tokyo nightclubbing scene. I’m getting a bit too old for clubbing now, but I’m fine with that. I get enough stimulation from high quality sashimi with a bottle of sake, or reading a good book on the train, or seeing a good movie in widescreen Imax 3D, or listening to a new album if I can find some decent new bands.

What do people know you for? They know me as that weird/cool/embarrassing/delete as applicable guy who goes on and on about pop-culture trivia.

Thoughts on Tokyo? It’s home to me now, and that operates on several different levels.First, it’s where I married and settled down. Secondly, there’s always something interesting to do and look at. Tokyo is a city with Multiple Personality Disorder; it’s a huge collection of linked villages, each with their own history, culture and atmosphere. The East, the oldest part, has its proud, atavistic spirit, while the West has its stylish, bohemian glamour. Also, if you stand still in Tokyo for long enough, everything in the world will pass in front of your eyes, whether it’s a touring museum exhibition or a vintage paperback novel in the retro bookshops of Jimbocho.

I met John Paul when I lived in Tokyo a few years back. I adore our conversations that flow from literature, the trials of tribulations of being a writer (in my case photographer) mythology, music, the Japanese ukiyo-e artist Hokusai of the Edo period, Thatcher’s Britain, and what was the motivation of Japanese author Mishima to take his life in such a way. John Paul thought that it would be fitting to have his portrait taken around The National Museum of Emerging Science and Innovation, known as Miraikan, which means “Future Museum” in the Odiaba area of Tokyo. The Miraikan is one of the locations where John Paul went to do research for his trilogy Sword, Mirror, Jewel.

If you enjoyed reading this conversation with Mr Catton please feel free to send me an email, I always love to hear your thoughts and comments. Tallulah can be commissioned for all types of portraiture, contact her to discuss further.