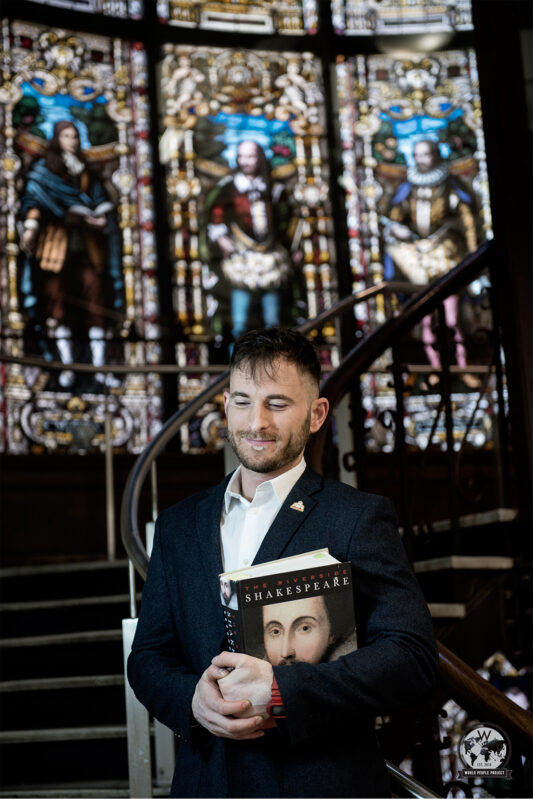 I am currently directing the play, The Madness of George III, for the Shaw Festival at Niagara-on-the-Lake in Ontario. It was written by the renowned British playwright Alan Bennett, with whom I proudly share a surname — even though we aren’t related! I met him for lunch on my last trip to London in the UK to discuss his play.

Provenance: I grew up in the ‘burbs’ of Vancouver and moved into the city as soon as I started college.

How Long have you lived in Vancouver? Vancouver is home, although I now spend equal amounts of time in Ontario and London. I haven’t had a permanent home in about four years. This may seem stressful to some but I am quite enjoying my transient lifestyle. I can fit my whole life into one 50-pound suitcase — the airplane limit! My new goal and love is New York City. I was there for a week last summer while on tour and fell in love with the city. I hope to spend more time there.

Occupations: Besides the odd coffee shop job while going to school my favourite summer job had to be piloting the small water taxies for False Creek Ferries. Zipping around False Creek all summer and meeting people was a ton of fun. I spent a few summers doing that. Ever since I was 14 years old I knew I wanted to be a theatre director. I have followed that dream with an obsessive passion and am thrilled to be living the dream. I wasn’t into Shakespeare when I was younger, in fact I didn’t understand it and I felt I wasn’t smart enough for it. This all changed while studying at Langara College’s Studio 58 (a professional theatre training school based in Vancouver) and I was given the eye-opening opportunity to be English actor, director and playwright Antony Holland’s assistant on a production of The Merchant of Venice. Holland was the founder of Studio 58 and was regarded as one of Canada’s most venerable actors. Since then I have become known as someone who directs a lot of Shakespeare; to date I have directed five of his plays and worked on an additional six in the capacity of assistant or associate director. As well, I also teach acting and directing. This has allowed me to work with all types of actors: teenagers, professionals and people from marginalized communities. Life never stops giving me interesting surprises because of the range of people I meet as a result. My career has taken me to Shakespeare’s Globe Theatre (an accurate reconstruction built in 1992) in London, which stands a few hundred yards from the original site. I have a deep connection and respect for the power of that space. Last year I toured internationally with the Globe’s The Merchant of Venice. The tour took us from the United Kingdom to the United States, China, Hong Kong and Italy. One day I would love to be the artistic director of the Globe Theatre. I am also interested in alternative mediums to theatre and would love to direct a film and experiment with podcasts as a medium to communicate my ideas.

Passions and Interests: I am good at inspiring people to find their passion, do their best and realize that hard work with dedication pays off. I am also very committed and disciplined in my work so I run a tight ship. I am comfortable communicating with people — as a director, you spend most of your time talking to people. I am most passionate about my work and story telling, which allows us to learn about ourselves and connect with others while experiencing empathy — the most important aspect of being human. Outside of work I love walking and can walk for hours across a city. London is a fabulous walking city. I like the outdoors and I like being on the water; it is a pleasure to take the BC ferries to Vancouver Island. I enjoy people; there is nothing like a drink at a nice restaurant with friends.

What do people know you for? Theatre people know me as that young director who does Shakespeare, although I direct all sorts of plays and love a brand new script. Friends know me as being driven, passionate and interested in taking risks.

Thoughts on Vancouver? Vancouver is home. I usually live near Commercial Drive when I’m spending time in Vancouver. I just love that every time I walk down that street I see the friendly face of someone I know. Vancouver also seems peaceful to me; it has a more relaxed nature than other places I hang out, like London or Toronto. I love a big bustling city but sometimes a walk through Stanley Park is so rejuvenating. I love the beauty of Vancouver and how close it is to the ocean.

I first came across Kevin’s name when I was walking through Carnegie Community Centre, which is located on Main Street at the corner of Hastings Street in the old Carnegie Public Library building. There was a poster advertising The Honest Fishmongers’ Shakespeare classes for the community on a Sunday night. I contacted Kevin and he agreed to meet with me after one of the classes. His commitment to working with marginalized communities such as those in the Downtown Eastside, in addition to working for prestigious companies, is inspiring. After a year of travelling with the London Globe’s international tour, I managed to catch up with Kevin for a portrait at the Carnegie Community Centre, which features a stained glass panel commemorating William Shakespeare.

Review by Colin Thomas on Kevin Bennett’s direction of King Lear in Vancouver. If you are travelling to London, I recommend going to see a play at The Globe.

If you enjoyed reading this conversation with Kevin Bennett please feel free to send me an email, I always love to hear your thoughts and comments.
Tallulah can be commissioned for all types of portraiture, contact her to discuss further.