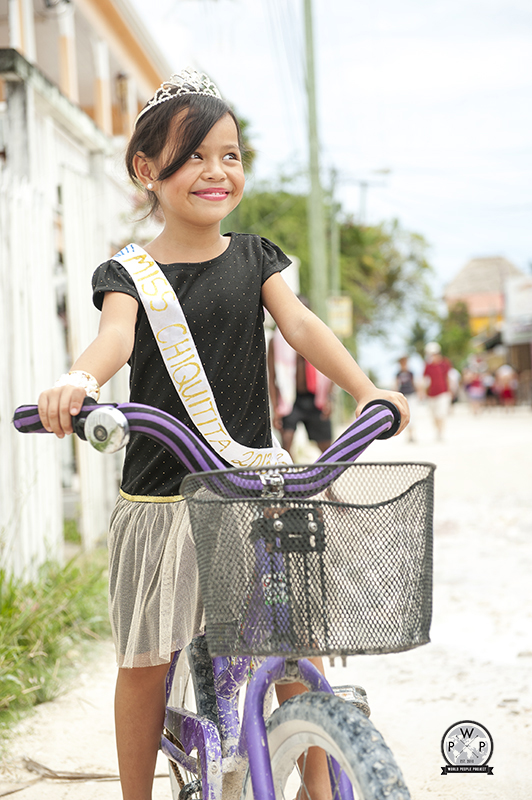 How long have you lived in Caye Caulker? I came to the island of Caye Caulker as a newborn; the hospital where my mother gave birth is in Belize City, which is 40 minutes away by high speed water taxi.

Occupations: I am in Grade 2 at the Caye Caulker Roman Catholic school, I study math, reading, English and Spanish.

Passions and Interests: I love bicycling; there are no cars on the island and spending time down at the split. The split is a narrow waterway that divides the island in two. This is a popular spot, with locals and tourists as the waters are safe to swim in. I sometimes go out to the reef with my Uncle who is a tour guide.

What do people know you for? Most people would know me because my family has lived on the island for three generations. And I won the Miss Chiquitita pageant in 2013.

Thoughts on Caye Caulker? We have a beautiful island and the second longest reef in the world. In my presentation for the Miss Chiquitita pageant I talked about our shark population being at risk. I titled it, “Don’t eat the Sharks.” In the past, fishermen from Caye Caulker would catch nurse sharks and they would be cooked in traditional Belizean dishes such as panades.

I was interested in meeting the winner of the Miss Chiquitita pageant, which is an annual fundraiser for the local school — education is not free in Belize. I met Kirsten at her aunt’s beauty saloon Purple Passion. I was very impressed to hear that Kirsten did a rhythmic gymnastic performance for the pageant that included the splits; she learned it all by watching YouTube. (There is not much in the way of extra curricular activities or instructors at Caye Caulker.) I photographed Kirsten with her beloved bike.