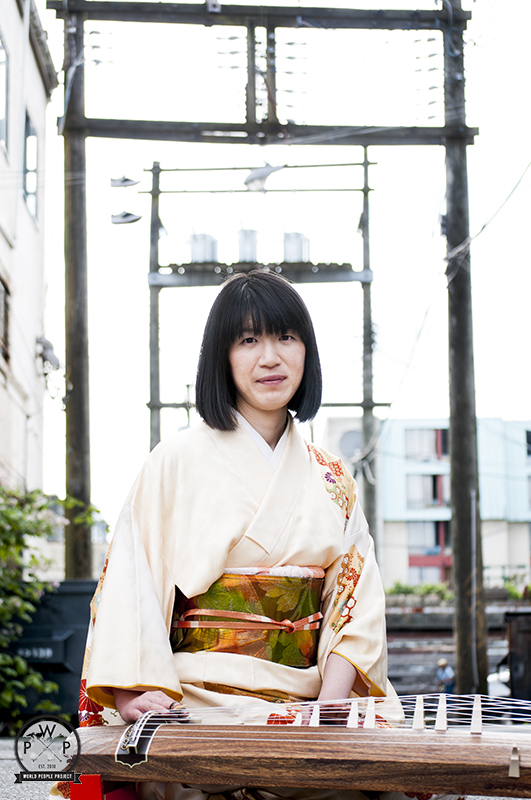 Age: August 15, but in Vancouver there is the philosophy that age doesn’t matter.

How long have you lived in Vancouver? Since 2004.

Occupations: Before I came to Vancouver I worked in the IT industry in Tokyo as a systems engineer. When I arrived in Vancouver I studied English, then started a master of arts degree at the University of British Columbia, graduating in 2010. The 2011 earthquake and tsunami was in my home region of Tohoku, so I have been working with the BC Japan Earthquake Relief Fund since then helping victims. I currently work at Capilano University in the Centre for International Experience.

Passions and Interests: I studied and played the koto, a 7th century, traditional Japanese instrument, since I was three years of age. I also enjoy musical collaborations with other artists from various cultural backgrounds and different art forms and am very involved in facilitating and nurturing such projects. The concept of ‘authenticity’ in art intrigues me, and I believe the arts need to develop beyond a ‘stereotypical’ art form while not losing its authenticity. By situating the koto in various contexts beyond its own traditional one, which is traditional Japanese chamber music, I am able to explore this. My activities are based on two questions: What does it mean to develop art in this way and how I can practice it with my koto music? Two events in Vancouver that I was involved in addressed these key questions.  These were “Anu 10,” presented at the 10th annual interarts event, and “Chrysanthemums and Maple Leaves,” which was a collaboration of three different types of Japanese traditional performing arts.

What do people know you for? Koto performer.

Thoughts on Vancouver? People are nice. They know they are lucky to live in Canada, and they are ready to help others when the need arises. Things are quite moderate and clean in this city. This is wonderful, but I sometimes miss the urban chaos that inspires creativity, which I have experienced in centres like Tokyo, Mexico City and New York.

I met Kozue at a Haiti earthquake relief fundraiser held at Tozenji-Seizan Buddhist temple in Coquitlam. I was enchanted by Kozue’s playing of the koto and we kept in touch afterwards. Kozue is immensely busy in the music scene and has a blog that informs readers about musical and artistic events that she is involved in. We chose an alley in the old Japanese area of Vancouver for the portrait. The poles in the alley were reminiscent of the torii gates found at Shinto shrines in Japan. Kozue dressed in a traditional silk kimono.