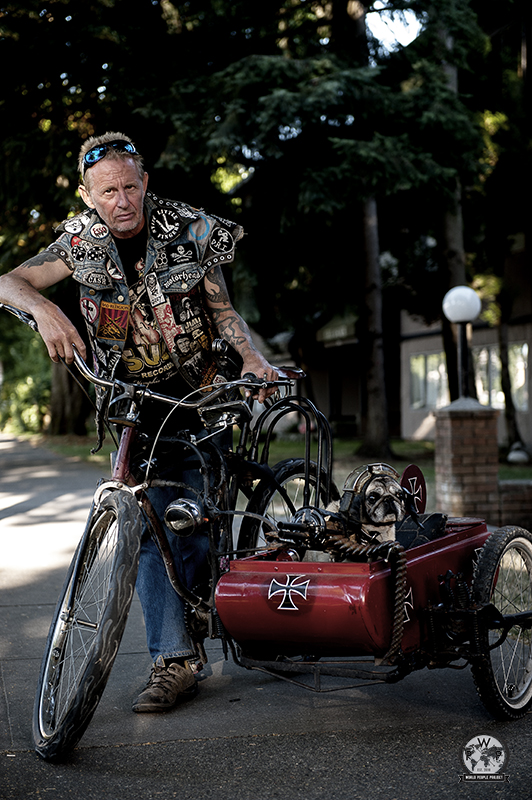 How long have you lived in Vancouver? I came here with my parents in 1967 when I was about 13.

Occupations: One of my first jobs was delivering flyers as a kid in Edmonton, since then I’ve done lots of oddball jobs. In the 1980s I was into the punk scene in Vancouver, doing vocals for the band Slaughter Squad. I lived an intense punk life style: broke, hungry, a junkie and living on welfare. Since then I have worked in the movie industry as a carpenter, metal fabricator and foam carver. In the past 10 years I opened two galleries: the Alley Gallery out of my house and the Hasty Hawk Gallery, which became the second-largest lowbrow art gallery in Vancouver.

Passions and Interests:  I learned welding as a kid, and I like to build things, such as a koi pond and, most recently, a chicken coop. There are no chickens in it yet, as the landlord is proving to be a stumbling block. Currently I’m planning a neon art show that’ll be open by the end of 2013.

What do people know you for? I’m best known for my art, including one show called “Big Can of City Dog Food” that was exhibited at the Fall Gallery a few years ago. Many folks recognize me and my dog Yoda on my cruiser bike riding around the sea wall and Main Street. I designed a custom sidecar for him, which was inspired by the Red Baron of Snoopy fame.

Thoughts on Vancouver? I love the ocean, love that the mountains are close, love the people, love everything apart from it getting yuppified. I don’t like where Vancouver is heading: rents going through the roof and becoming more and more expensive to survive. My serenity spot here where I live, how long will it last?  I mourn the loss of our lowbrow art gallery scene; there used to be hundreds of galleries for artists to show their work.

I first saw Mad Dog and his pug Yoda sitting in his beautifully detailed sidecar outside a café on Main Street. Mad Dog is an amazingly diverse artist. He keeps his life simple, with no emails or cell phones. For the photo shoot, I chose a portrait of Mad Dog with Yoda located near their home.