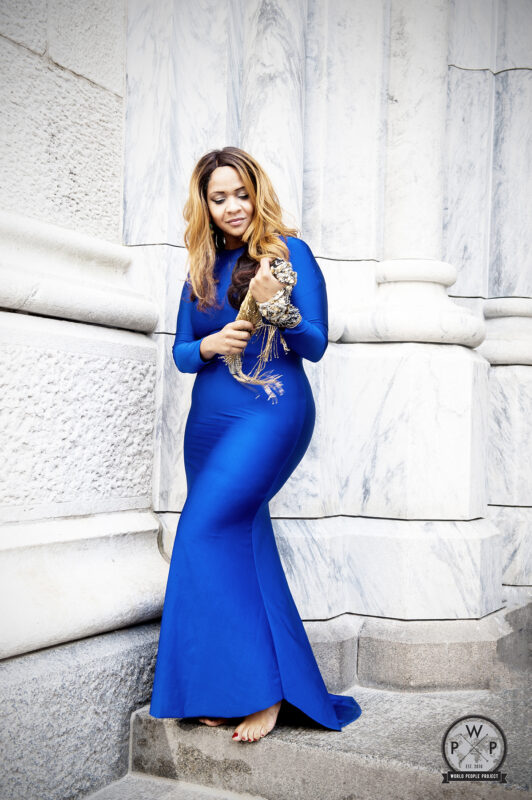 My father named me Martine after a girl who sang in his church; her voice moved him greatly. The Italians called me Martina!

Age: A legend born in the early 1980s and an Aries to the fullest.

How long have you lived in New York? I am a native New Yorker; we work hard and play hard.

Occupations: I have worked in every Manhattan neighbourhood with jobs just as varied: Starbucks barista, housekeeper, swimming instructor, home health aid worker and a gig at the America Museum of Natural History. However my real work, since the age of four, is singing. After college and a term studying music in Italy where my love of travel and culture blossomed, I returned to New York. Inspired to keep challenging myself, I combined hip-hop with classical music and performed in many of New York’s underground clubs. Ten years ago I became a busker with MUNY (Music Under New York). I sing classical music as the Angel of New York. To supplement my income I work part time as an office assistant. In 2012 I made my first operatic debut with Opera Ebony, which is an African-American opera company. One of its mandates that I also feel passionate about is taking opera into different communities and cultures. I have been fortunate to be on many of New York’s finest stages: Carnegie Hall, Lincoln Center, Apollo Theatre and Soho Playhouse.

Passions and Interests: I love to perform for people; this gives me the greatest pleasure. Music from all cultures, dancing salsa, swimming and the study of science ignite my love of life. My mother and brother are my best buddies and my friends, everyone who shares my life are truly important to me. All my life I have been a spiritual seeker, this has led me to continue with my study of the bible and a continuing interest with the Hebrew language.

What do people know you for? Most people think I am sweet and kind. I have heard people call me beautiful. There are a few people out there who think I am crazy and arrogant. I am sure millions of subway commuters know me as the Angel of New York.

Thoughts on New York? New York is loud, fast and sometimes the materialism and conformity is overwhelming. It’s a never-ending rat race, but it’s still my home. The people are really what make New York for me; my busking in the subway system relies on the kindness of people who are willing to open their ears and their heart. The love I receive while singing inspires me and nourishes my soul.

I love subways: London, Tokyo and New York all have a special place in my heart. Inspired by the Tokyo subway system I created a photo essay: Tokyo by Train. After descending into the New York subway, one usually hears music of all styles through the clatter of trains and humanity. One evening as I was traversing Manhattan I heard this beautiful operatic singing and came across the Angel of New York. She was dressed in white, with wings fluttering in the wind of the subways. Watching the reactions of the commuters was uplifting. Our portrait session was in the daytime outside St Patrick’s Cathedral on Madison Avenue. For the portrait Martina dressed in a slinky electric blue dress, choosing to forgo shoes.