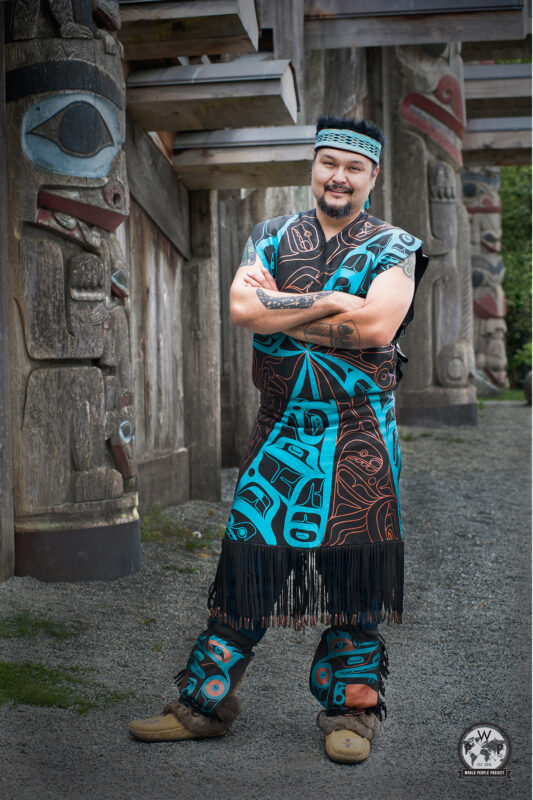 Goothl Ts’imilx is my real name. In Nisga’a it means “Heart of the Beaver House”. My name in Tlingit is Teettlien and it means ‘Big Wave”.

Age: Born December, 1972. So close to Christmas, my mum put me under the Christmas tree.

Provenance: My family is originally from Tombstone Bay, Portland Canal area, which forms part of the border between southeastern Alaska and British Columbia. In the early 1900’s they moved to the village Gingolix, in the Nisga’a territory, BC. I went to high school in Juneau and Metlakatla, Alaska.

How long have you lived in Vancouver? In 1999 I was passing through Vancouver on my way back to my family home in Northern B.C. and I ended up settling here.

Occupations: Since I was a child, art, singing, dancing, and carving have been something I have done. During my elementary, middle, and high school years I did construction and commercial fishing for work. At 17 I joined the United States army, my mother begrudgingly signed my papers.. as I was underage. I am 4th generation military on my mother’s side, with family members serving in the US Military, starting with my great grandfather who served in the Alaska Territorial Guard. My grandfather served in the US army during World War II, my uncle as a US marine in Vietnam, and my other relatives where in the US navy and US marines. I served around 10 years as a US army airborne ranger. After the army, I continued to practice art, singing, and dancing, and I went to university in Alaska studying history and social sciences with a minor in American diplomacy. I then moved to Seattle, Washington state. To support my family I worked at Big 5 Sporting Goods. During this time there was a pivotal moment when a master carver told me to get off the dime and become an artist. Since 1998 I have been a professional artist. My works include over 20 totem poles, a 30-foot ocean- going canoe, masks, drums, regalia, paintings, and limited edition silk-screened prints. From 2003 I have been leading the Git Hayetsk First Nations Mask-Dancing group. Git Hayestsk means “people of the copper shield” in Sm’algyak, which is spoken by the Nisga’a, Tsimshian, and the Gitxsan Nations. The group performs regularly in Vancouver and we have been invited to perform in Germany, Japan, Austria, and China. Currently I also teach a lot of subjects ranging from speaking protocols at potlatches to West Coast First Nations designs through my studio The House of Culture. I have also hosted 16 potlatches and continue to write and create new songs and dances for the group the Git Hayetsk Dancers.

Passions and Interests: I am passionate about many things. Recently I feel strongly about gender balance, and we work in the dance group to honour the male and female power. All humans have a male and female side to them. I also feel that the power of masks are important in helping to empower the youth of today so they can be successful and face their fears. The Wild Woman of Vancouver is a dance mask that came into being, inspired by a late night incident in East Vancouver that shook my son up a bit. It took that experience and transformed it into something uplifting, positive, and humorous.

What do people know you for? I am told that I have the gift of the gab. In First Nations communities, I will be known for leading potlatches and that my feast hall voice projects without microphones and is trained to sing and talk for hours.

Thoughts on Vancouver? Vancouver is not my traditional territory. I have been adopted by the Musqueam and have received permission to do my work here by the Squamish and Tsleil Waututh nations. It has been good to me. My career as an artist has taken off, and I have a home and a welcoming Aboriginal community. I love biking, but I’m not a big fan of the bike lanes. Traffic is getting crazier, and the housing prices seem to keep going up. I think there is a bit of racism in Vancouver, but the majority of people are open to learning and changing.

Mike was one of those people that I met years back who begged the question, Who is he? What is his story? This was of course before I had come up with the concept of the World People Project. I had photographed him dancing at an event at the Vancouver Aboriginal Friendship Centre on Hastings Street. Fast forward to the present; Mike is so busy that it was quite tricky finding a time to photograph him. This portrait was taken after he and the Git Hayetsk dancers had been performing at the Museum of Anthropology in Vancouver. This place is important for Mike, as the great hall has one of his ancestral poles in the collection and he has lots of great memories of dancing and singing there. Mike is wearing a tunic made out of elk leather and acrylic paint; the designs represent his Tlingit name. The head piece is a weave called raven’s tail made by Keane Tait.

Conversation & Portrait by Tallulah
May 2015,Vancouver
Published on February 17 2016

If you liked reading this conversation with Mike Dangeli please feel free to send me an email, I always love to hear your thoughts.
Tallulah can be commissioned for all types of portraiture, contact her to discuss further.