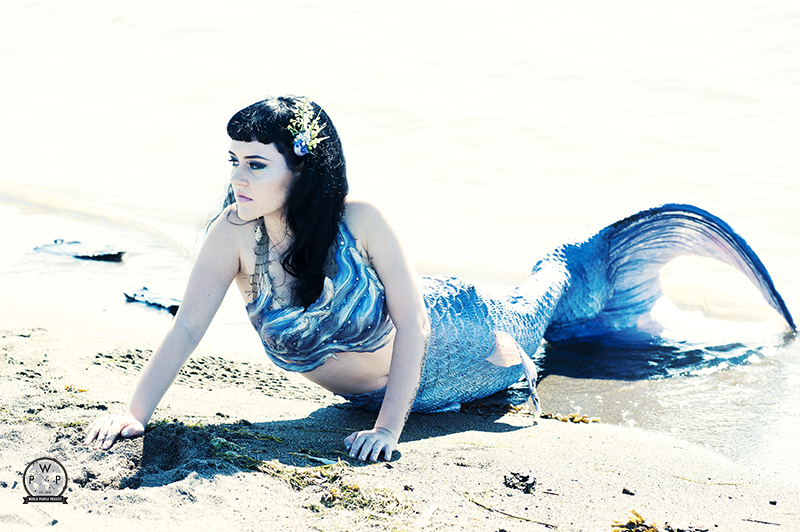 Born: Vancouver but raised in Burnaby.

How long have you lived in Vancouver? I still live in Burnaby, but come into Vancouver nearly every day, I left the province for one year to live in Florida.

Occupations: Most of my work is performance-based: acting, modeling and swimming. I started swimming at a very young age — as a four-year-old watching Disney’s The Little Mermaid, I realized I wanted an exciting aquatic life. The movie Splash made me realize that realistic mermaid tails could be created. I made my first tail myself out of my mother’s leather pants. The fins were created using a blue shawl. Posing for photographs was difficult enough — swimming with it was out of the question. I started training in the art of mermaid swimming with a monofin. When I bought my first fabric tail a mermaid was born. I now have a custom swimmable tail made out of premium grade dragon skin silicone. I also was very fortunate to meet and model for one of the premier mermaid tail makers in the world, Thom Shouse, “The Tail Man.” Swimming in public as a mermaid and seeing all the joy and awe of onlookers inspired me to perform professionally as Mermaid Oceana. I have also worked at the Canadian Pavilion in Walt Disney World Resort’s Epcot Theme Park, I have scared you at PNE Fright Nights and have acted in many films and television series in Vancouver.

Passions and Interests: Being a mermaid is top of the list. Recently, while on a photo shoot on a beautiful beach in St. Petersburg, Fla, a pod of dolphins appeared out of the clear blue water, leaping and swimming around — truly a magical experience for a mermaid. Being a mermaid means bringing magic into people’s everyday lives. Hopefully it will also inspire people to protect our oceans. Polluted water means that wildlife and mermaids cannot swim! I have numerous other interests, too. This includes music, ranging from musical theatre to symphonic metal, as well as comic books, crafting, everything Disney and sword fighting. I also watch sci-fi, fantasy and cheesy horror films. Halloween is a major event at my house, which is so decked out in creepy decor that crowds of people come to look.

What do people know you for? At only 4’11”, I am known for being a big personality in a tiny package.

Thoughts on Vancouver? I enjoy swimming in the late spring and summer; at other times of the year the water is too cold. Not many cities can boast that it is possible to sail in the morning, golf in the afternoon and ski in the evening. Living in a city that is environmentally conscious is important for me.

A mermaid living in Vancouver?  My curiosity was piqued. Our first meeting was over afternoon tea; it was fascinating to hear her stories and how determined she is to make a dream come true. I went on a few scouts to find the perfect location, settling on a beach near Richmond. I quickly realized that a photo shoot with a mermaid has its own challenges; the tail is very heavy and we struggled over the sand dunes to reach the water. Once the tail is on, a mermaid is able to move freely only in the water.