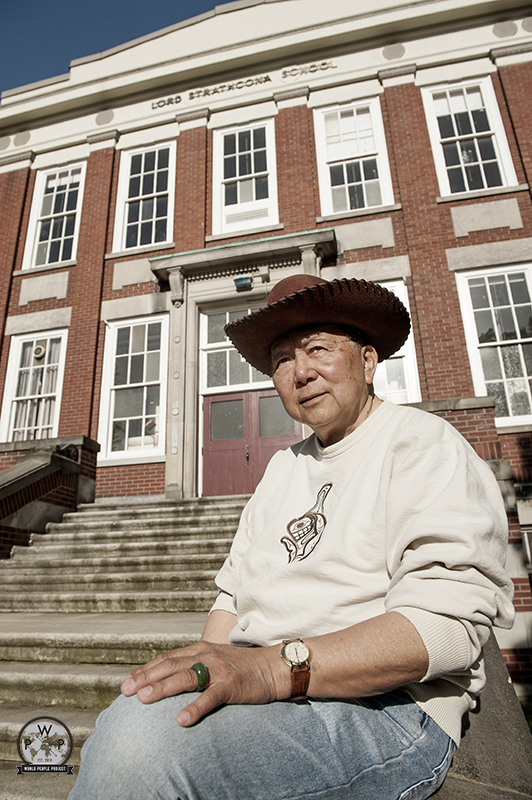 How long have you lived in Vancouver? I moved here with my family in 1945. My father was a farmer in the Okanagan Mission. He bought a house here at 817 E. Georgia St. His dream was to become an entrepreneur.

Occupations: My father died when I was seven years old. I had to go to work at a very young age as we were very poor. The summers were spent picking strawberries and blueberries. I also sold ice cream on Hastings Street. I was an elementary student at Lord Strathcona Community School but played hooky a lot to work at local farms learning to drive tractors and plough fields. I finally left school for good at age 15. I worked hard in factories and canneries and co-owned a few farms. In the early 1970s I started working with Smithrite Disposal hauling garbage in Vancouver. At that time, sensitive documents such as medical files were thrown into the garbage. This led me to design and build one of the first commercial mobile shredding machines. I used carbide steel and my design completely pulverized the documents. This became Confidential Shredding Service Ltd. One of my biggest accounts was the Insurance Corporation of British Columbia. I ran this business for about 25 years.

Passions and Interests: I thrive on making things work easier and better. My inventions have ranged from an air dome for crops, fibreglass chemical spraying tanks, high speed weeding machines, improved insoles for shoes, door plates for commercial buildings and of course the shredding machine.  I enjoy auctions, rock hound clubs with an appreciation for BC jade, low-stakes poker and making my own hats. I feel good helping people: if you fall down, I will pick you up; if you ask me for $1 to buy a beer I will give it to you. I am old school in my beliefs: one wife, one house and one car. Keep life simple. Be independent and free.

What do people know you for? Some friends know me for being an inventor, others know me from auctions, some from poker and some from rock hound clubs. People also think I have a curious first name, as it is a traditional Irish surname.

Thoughts on Vancouver? Vancouver is a safe place; your kids can walk down Hastings Street in the middle of the night and nothing will happen to them. I have travelled to Los Angeles and Chicago, where you could be robbed at a gas station. Vancouver is the best place in the world, although the city is growing bigger and real estate has become unaffordable. But what can you do?

I met Phinney in Chinatown — he was with his auction friends at the time. I found Phinney to be the consummate storyteller. One of my favourite stories was when, at the age of 10, Phinney was sent down to San Francisco to visit relatives. Before he left, his mother bought him a new blazer from Army & Navy. Arriving in San Francisco, Phinney was given a key to his relatives’ home and left to his own devices for seven days. At the end of the vacation, $5,000 was sewn into the lining of his new jacket with strict instructions to keep his jacket on until he arrived in Vancouver. This portrait was taken outside Lord Strathcona elementary school and Phinney is wearing a hat of his own design.