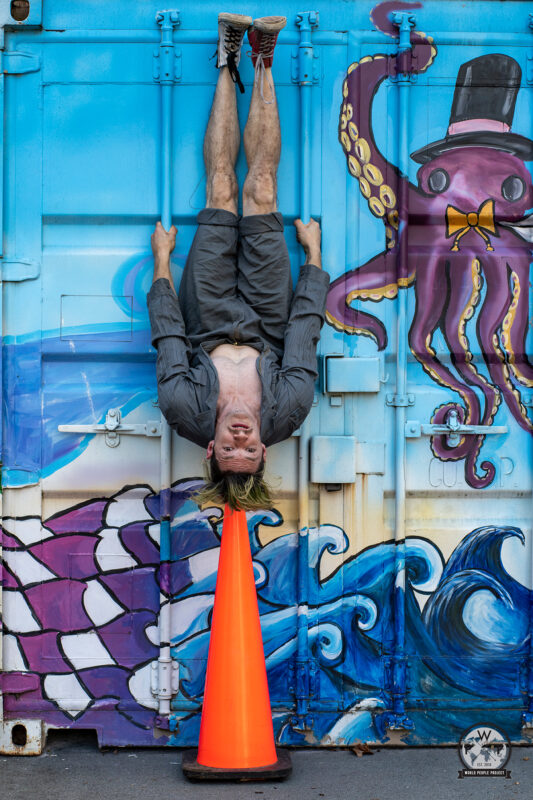 My birth name is Theo Francon, but I wrestle under the name Ravenous Randy Myers. Theo doesn’t quite have that tough guy wrestler ring to it (pun intended) Theo sounds more like someone who would paint your nursery so I went with Randy.
.
Wrestler, Performer Personal, Trainer

Provenance: I was born in Calgary, Alberta, Canada. Calgary holds the Guinness Worlds Record for the: worlds longest lemonade stand, most people dressed like Batman and the worlds longest dog tail, to name a few.

How long have you lived in Vancouver? I moved here in October of 2011 because I had fought all the spandex dude fighters I could fight in Calgary and I decided to head out west in search of new stretchy pant warriors.

Occupations: My first job, when I was 15, was a dish boy at Tim Hortons. I got the job because I really wanted a new skateboard. On my first day with a very busy lunch hour, I dropped all of Mr Hortons’ finest china onto the floor! A piece of china shrapnel, reminiscent of a ninja’s throwing star, spiralled towards my hand, severing the tiniest tip of my middle finger. I was rushed to the hospital. Perhaps unsurprisingly, Tim’s let me go, along with $300 of workman’s compensation, which was totally enough to buy the skateboard I wanted. SEE YAAA Tim Hortons! Being a professional wrestler and a wrestling coach has been my passion. Both gave me the chance to inspire people and impact them on a physical level. I love to share my passion for wrestling with those thirsty for wrestling and fitness knowledge. As a person who was born to entertain, and has explored many entertainment opportunities. I haven’t found anything quite as dynamic or exhilarating as being in the ring. I’m also a personal trainer, helping to encourage people, and leading them to their fitness goals. I would say I am an improviser, a personal trainer, and an artist. The most fitting description of me is being the innovator of insanity the creator of calamity punk hunk and yer weirdo hero.

Passions and Interests: I like to paint, I like to draw, I love to work out. I really enjoy looking at my framed picture of actor John Ritter (RIP) and I belong to an improv troupe and I love horror movies. My brain is always on the go, so I’m constantly chasing exciting new things to try. I have very strong oblique muscles, and if I was a punk rock singer I have considered the name, Theo Bleak!

What do people know you for? I’m known for my green hair and the way I slink around a wrestling ring, as well as for my over the top facial expressions and embracing the weirder side of things.

Thoughts on Vancouver: Vancouver is known as one of the loneliest of Canadian cities, but I have found group after group of great people and like-minded weirdos here in Vancity. I thought I left Calgary because I couldn’t stand the cold weather. But, in reality, I left because people couldn’t stand me complaining about it any more. Vancouver means no -40 C days!

I have had it my mind for a while to photograph and feature a wrestler for this project. I did find a wrestler in Scotland to be in the WORLD PEOPLE PROJECT, but our meeting never happened and I was left waiting at the Argyle Steet railway station in Glasgow in the rain. Years later I was invited to a comedy event – Randy came onto the stage and did a wonderful spoken word piece, it was touching and resonated with me. I then went to photograph Randy performing at September’s Glam Slam, a wrestling event where professional wrestling collides with burlesque for an action-packed and hilarious mash-up of physical and seductive skills. This was was a lot of fun, and even though you know its kinda not real – the acting skills and the physicality of the performers carries you past your disbelief. For Randy’s portrait we arranged to meet at the community centre in Kitsilano where he trains and before we realised it we were in the children’s playground, a perfect backdrop for the weirdo hero.

If you enjoyed reading this conversation with Randy please feel free to send me an email, I always love to hear your thoughts and comments.
Tallulah can be commissioned for all types of portraiture, contact her to discuss further.