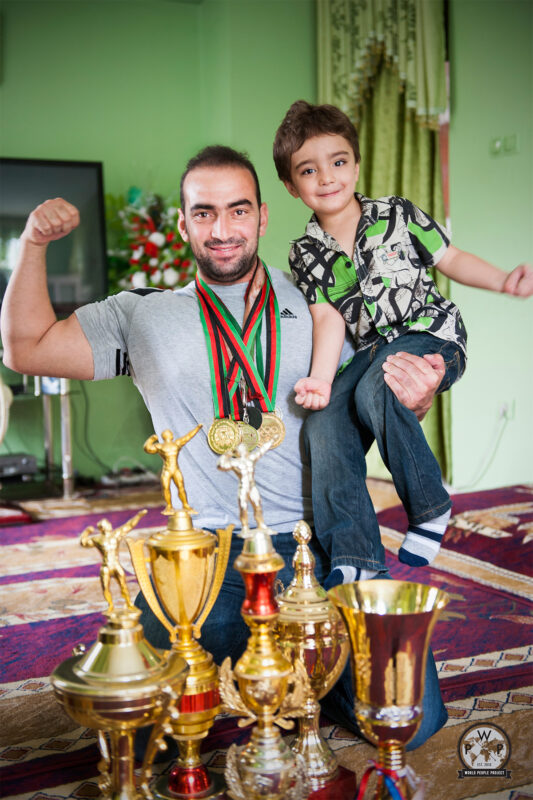 Shuja means brave and my parents named me that due to the uncertainty of life at that time.

Age: I was born on the 1st day of January 1981, so a New Year’s baby. The USSR had invaded two years earlier, in December 1979. After my parents and the doctors the next person to see my face was a Russian soldier who said, “welcome new flower to the garden of the world.”

Provenance: I was born at Malalai Maternity Hospital in Kabul, the capital of Afghanistan.

How long have you lived in Kabul? Due to the war, like many families, we had to leave our home and we fled to Karachi in Pakistan, we returned to Kabul in 2004.

Occupations: I have done so many different kinds of hard work; to make money to help the family, as a result, I could not study or have fun with my friends when I was a child. From the age of 16 for two years I worked in a company that made steel I will never forget pulling steel out of a hot furnace with the hot air breathing against my face. Another gruelling job was processing cotton into string. The hours would be from 8 am to 5 pm. The high temperatures were almost unbearable. Sometimes our family needed extra money to pay rent or our power bills so I would have a job sorting boxes of garments into big containers, which would be exported to other countries. In Pakistan, I also used to make Afghan ice cream called shir yakh, which is very famous. I would make it late at night to be ready for the next day. I was a refugee for over 10 years and eventually, we moved back to Kabul and that is when I started going to the gym for bodybuilding and started work as a driver, translator and ‘fixer’ for journalists. ( A fixer is someone who is hired by a foreign correspondent to help arrange a story. Fixers act as translator and guide and arrange access to local interviews that the correspondent would not otherwise have access to.

Passions and Interests: I was attracted to bodybuilding because it was a sport where there was no physical contact. I could not hurt anyone — the thought of hitting someone was too violent. And I have seen too much violence in my life. In 2009 I received second place in the Mr. Kabul Bodybuilding Championships. I have a dream that one day I will become a world bodybuilding champion and join the Mr. Olympia championships.

What do people know you for? People know me for my bodybuilding and being a strong guy.
Thoughts on Kabul Kabul means a lot to me a lot because it is my hometown and I was born here and my mom and dad are from Kabul. I like Kabul because it is the largest city in Afghanistan, there are embassies, government ministry offices, hospitals and universities —everything is available in Kabul. Sadly, Kabul has very bad pollution and that affects everyone’s health.

I met Shuja on a photographic assignment to Afghanistan he was recommended as a fixer for us. I remember clearly the day we met he was wearing a very lovely white freshly pressed shalwar kameez. Over the few days, he carefully guided us around Kabul – up the Asamayi Mountain (also known as Television Hill) before sunrise – to the ruins of the Darul Aman Palace where we met soldiers billeted there to protect it from stray dogs, beggars and drug addicts. With great skill, he took us on foot crossing the Kabul roads, that seem to have no rule of law as regards the traffic. If I remember it was sort of terrifying and I would grab onto his shirt in order not to get lost or hit by an oncoming car. This portrait was taken in Shuja’s home where we were invited for a big breakfast feast and to meet his family. Here he is with his son and various medals and trophies he has won for his bodybuilding.

If you enjoyed reading this conversation with Shuja please feel free to send me an email, I always love to hear your thoughts and comments.
Tallulah can be commissioned for all types of portraiture, contact her to discuss further.