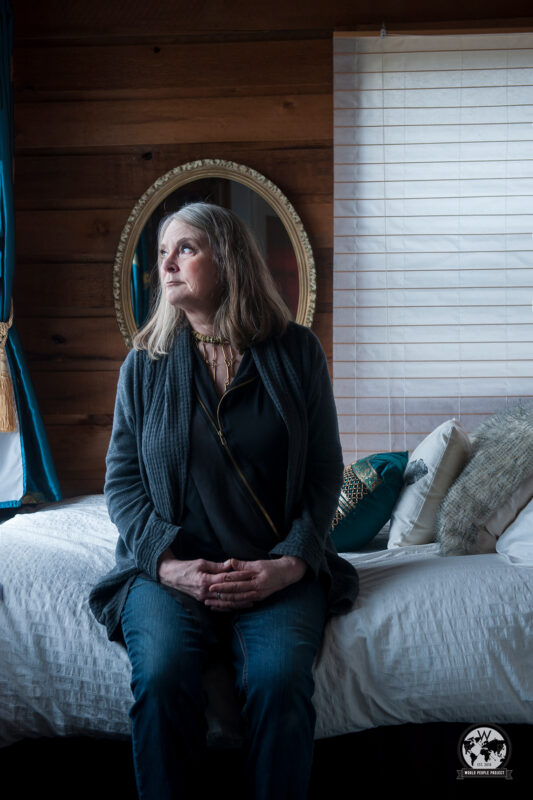 My ancestors, Anglo-Scottish border reivers whose motto was “We never change,” carried on a three-century vendetta with a neighbouring clan, the D’Acres, whose sins included felling a sacred oak from which my relations liked to string up robber-barons (the early equivalent of land developers) by their necks.

Poet
(I don’t give myself titles. It’s too fun watching other people do it for me.)

Provenance: Santa Cruz, California. My (Canadian) parents were travelling, my father was looking for work. I am not an American. “If a cat has kittens in the oven it doesn’t make them cookies,” my mum always said.

How long have you lived in Haida Gwaii? Since 1972. I moved away, back to Vancouver Island, in the 80s but kept coming back. I bought my land on the Sagan River in 1992, and Stephen began building our house in 1997. I bought Copper Beech House in 2010.

Occupations: I have published more than 30 books, have been nominated and has received awards, in seven different categories of writing: poetry, fiction, non-fiction, personal essay, cookbook, children’s writing, and for my work as an editor. My latest novel is Given, a sequel to Cargo of Orchids. I live on Haida Gwaii where I own and manage Copper Beech House, and teach poetry in UBC’s Optional Residency MFA Program in Creative Writing. A Taste of Haida Gwaii: Food Gathering and Feasting at the Edge of the World was published in 2015 by Whitecap. It won gold in the Bill Duthie B.C. Bookseller’s Choice Award and in the Taste Canada Awards.
In 2012 I won the Spirit Bear Award for my “enduring contribution to the poetry of the Pacific Northwest. ““Her artistic presence over the past 40 years has helped create who we are,” wrote Patrick Lane. “She is as important to us as Emily Carr.” In the fall of 2014 I won the Matt Cohen Award in Celebration of a Writing Life from the Writers’ Trust.

Passions and Interests: I like to learn something new every day. I love food gathering, cooking — trying new recipes that fuse different worlds and cultures — eating. Drinking good wine. Having dinners with friends. Making dulce de leche buttermilk ice-cream. Walking in the dunes on North Beach. I read, watch addicting Netflix series and playing Monopoly with my granddaughters, Beatrice and Lucca. (I teach them how to steal money from the bank. And also how to steal houses. What’s the point of playing any game seriously?) Going to Gwaii Haanas whenever I am invited. Writing poetry, reading poetry. Travelling (especially in Ireland, where I have spent a lot of time.)

What do people know you for? My sourdough bread, my red pepper jam? Being a marriage commissioner on Haida Gwaii. I applied as a joke. One of the questions I was asked was, “What qualifies you for such a position?” I replied, honestly: “I’ve been married three times. Third time lucky because he’s spent most of our 25-year-marriage in prison.”

Thoughts on Haida Gwaii? Rain and wind and sitting curled up beside the woodstove with a cup of tea. It means home. My spirit is at home on Haida Gwaii and when I leave the islands a big part of me feels missing. I feel safe there. There is much less bombardment from the outside world.

I photographed Susan at Copper Beech House the charming guest house that she owns. It is a warm place and when you arrive, you feel at home, books, curious mementos and art surround you. For the portrait Susan wore a necklace that I believe she wore in a photo shoot many years past. Susan inspires me to keep creating to keep strong – the life of a writer/artist is never that easy. I did have the divine pleasure of eating some of her delicious sourdough bread – that in itself is a reason to go to the Copper Beech House in the magical Haida Gwaii.

If you enjoyed reading this conversation with Susan please send me an email, I always love to hear your thoughts and comments.
Tallulah can be commissioned for all types of portraiture, contact her to discuss further.