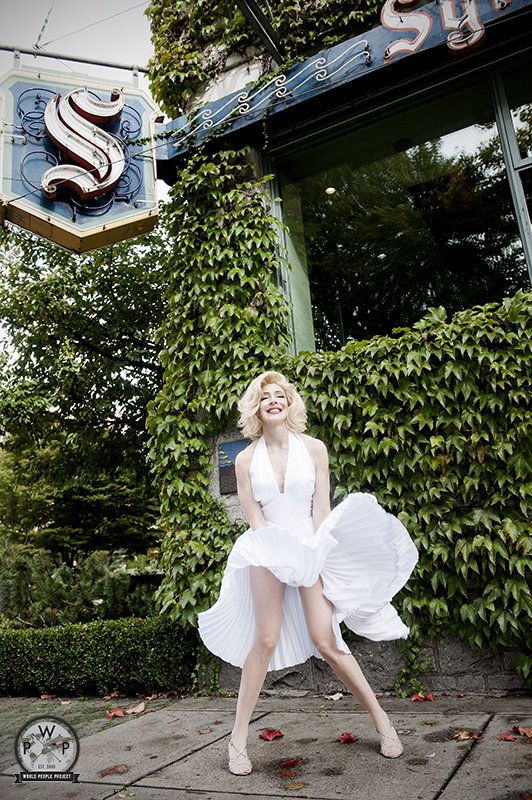 How long have you lived in Vancouver? Since 1990

Occupations: At the age of five I was producing my own show in my family’s basement. I was a popular babysitter when I was 12. At 14 I started working at the Woolco department store. While attending university, I held down three jobs at the same time. One of the jobs was as a coat check girl at a nightclub, where the staff performed stage routines. I auditioned as Tina Turner and started performing during my breaks. I would quickly change into my Tina costume, perform “Better Be Good to Me,” then run back to the coat check. Next, I would perform as Marilyn Monroe. Eventually I thought I should start impersonating people whom I actually looked like, so I moved on to Cher and Liza Minnelli. Within a few weeks I was hired full time as an in-house entertainer, and have made my living as a performer since 1985. I have performed thousands of shows for parties, charity fundraisers and functions, including singing “Happy Birthday” to former prime minister Pierre Trudeau. Lots of exciting gigs have come my way, but one that stands out is when I was flown to Louisville for a Kentucky Derby VIP party. I had some of the Cincinnati Bengal football players on stage with me as Madonna’s boy toy dancers.

What do people know you for? In the West End where I live I am Tracey Bell. But to an audience I could be Cher, Marilyn Monroe, Celine Dion, Liza Minnelli, Madonna, Janis Joplin, Tina Turner, Dolly Parton, Julie Andrews or Judy Garland. I created my own one–woman show called 8 Divas in 44 Minutes. It’s an interactive, comedic, quick-change show and I get the audience to play along on stage. When I am Marilyn, I portray her as sweet, charming and approachable, playing up her comedic, childlike side; she is a classic, universally known icon for people of all ages. People see the playful, naïve nature of my portrayal and feel safe to interact.

Thoughts on Vancouver? It’s my dream city. I came to Vancouver with my mom when I was 14 and I knew this is was where I wanted to be. We stayed at the Coast Plaza Stanley Park and that is the neighborhood I’ve been happy in for more than 20 years. I like walking everywhere; to the ocean and throughout Stanley Park, to great restaurants, to the grocery store, to my mom’s house, to appointments, to the gym and just walking without a destination. The scenery is breathtaking and always changing, the grass is green all winter and something is always blooming. I can garden year round. Vancouver is full of diversity: cultural and culinary.

For this portrait Tracey decided to be Marilyn Monroe, wearing a white dress similar to the one that was worn in the iconic film “The Seven Year Itch.” We photographed outside the Sylvia Hotel, which has a movie star vintage charm and is one of the oldest landmark buildings in the West End. The shoot created a lot of smiles from onlookers and even the Vancouver rain stayed away.