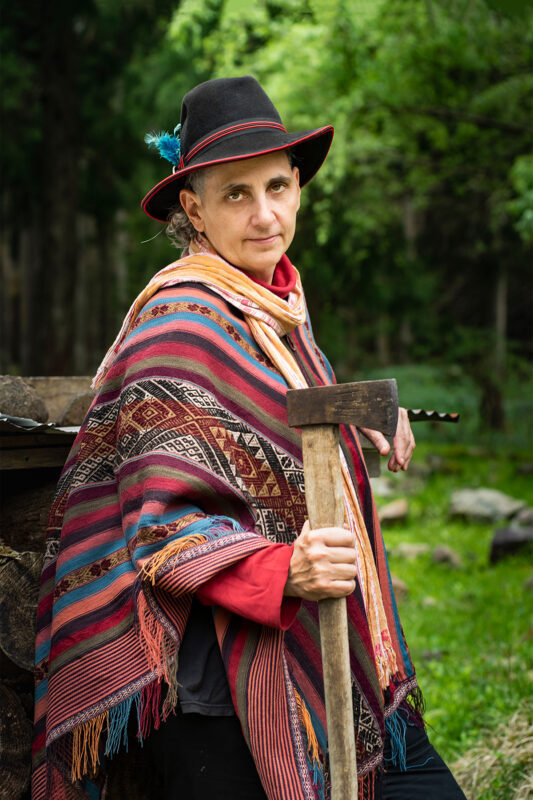 My nickname while attending alternative private high school based in Sedona, Arizona was Spacey Tracey. In Japan, where I live now, am known as Tore-chan.

Provenance: Born in the multicultural melting pot of Toronto, Ontario, Canada, I lived there for over 14 years. As a child, school was made up of diversely coloured kids, and from then I had this fascination with countries outside the western world I grew up in. I remember questioning my mother, why they didn’t eat with a knife and fork, and why they used sticks. As Jews, we would gather “religiously” every Sunday in Chinatown for dinner; it was the only neighbourhood of conservative Anglo-Ontario open for business-as-usual on Sundays in the 60s. Thank you to the three Gods: Fu, Lu, Shou! In elementary school, I skipped Grade Three and then, later on, I took extra credits during summer school, so I could start university at 16. I was very keen to leave North America ASAP for the East and explore the world.

How long have you lived in Kyoto? I came to Kyoto in the 80’s to complete a college internship. I wanted to have access to the seat of Zen studies, though I wandered off the path when I built my home-studio from scratch and pursued a career as a clay artist…that took me to rural Kyoto in the early 90’s. However, I really never left the path and am actually right Smack-In-The-Middle of it!

Occupations: I was a horse trail riding guide every summer in the early 1970s.The constant exposure to the outdoors means you physically experience the harshness and ecstasy the different seasons bring. I had odd jobs relating to the horse riding stables, and vegetable farms which means learning respect and responsibility and the value of a buck as my father taught me at a young age. A cowgirls’ work is never done! I went to Verde Valley School for two years – which was located in the red rocks of Sedona, Arizona – it was an alternative, anarchistic commune-like high school. Living in that environment will change the way you think so there was a big shift in my priorities and understanding of the connection of natural environment, spirituality and the cosmos. I also took an Oriental history elective which sparked my interest in Oriental Religion and Philosophy i.e. Buddhism. I lived on and off in mind-expanding, experimental California: Berkley, Stockton and Carlsbad for about two years which also contributed to my Zen stepping stone to Japan. I studied in a Soto Sect Zen temple in Nara for three months, but it was a big disappointment the priests and monks were really no different from the average social group – parties, eating meat, affairs – progressive Buddhism?? I became disillusioned with the Japanese Zen way. I taught English in Japan in the early eighties and I have been an occasional interpreter/translator throughout the years. All those tasks exercise the bi-lingual brain: clicking back and forth between English and Japanese is hopefully an Alzheimer preventative! My life as a clay artist and the opening of my studio: Tracey Glass Studio 22 which specialises in wood-fired clay glazes followed. I create ceramics, directly from nature, digging the clay, collecting various woods for making the tree-ash glazes directly in my wood-burning stove (which is used for heating the house). I build the shapes and forms, fire my wood burning kiln and make the glazes, I purchase only 10% of the ingredients for my ceramics. The process of creation fascinates me and I feel blessed to receive a small portion of the credit for the results of converting the earth, with the power of the flame, which I can make into an aesthetic entity on its own, using shape, form and abstract colours. I curate unique exhibitions in non-typical venues: for example temples, shrines, sake refineries, ultra-modern architectural buildings, old farmhouses, old cinemas, instead of the standard one-room city galleries.

Passions and Interests: Art in all forms, art in nature, culinary creations that are art and the art in Zen – finding art in every single thing. The world with all its’ religions, philosophies, rituals, ceremonies, customs and ancient cultures. In order to experience the world. I travel to remote parts of the earth to connect with the locals or indigenous people. I will eat everything they serve (basically what I do here in Japan all the time). I see myself as some kind of anthropological ambassador: upholding customs as best as I can, adapting to unknown cultures.
Living and soaking up nature, recently I feel I am connecting more with the plant spirits and what they convey to us.

What do people know you for? Being a curious combination of fun, different (strange), curious, out-of-the-norm, free-spirited, and a world traveller. Possessing an unique ability to shape occurrences into more artistic, or sometimes bizarre, or humorous positive vibrations. Dependable and compassionate; I was the main caregiver during my colleague’s terminal illness. Sincere interest in ancient Japanese (and other culture’s) traditions and customs, especially those connected to nature such as Shintoism. Some Japanese say I am deeply Japanese in my essence.

Thoughts on Kyoto: Kyoto = HOME! It is the core of Japanese history and culture. When my colleague and I began our quest for the ideal place in rural Japan to establish our studio, Kyoto was avoided. There’s an image in Japan that Kyoto folks are reserved, difficult to break the ice with, don’t mean what they say— snobbish and elitist even, probably because of their historical significance/status as the Old Capital cultural centre. After a year of unsuccessful house/studio searching, when we were discouraged and almost threw in the towel, good fortune (Karma) placed us into the hands of a carpenter from Ayabe, Kyoto. He took us under his wing and together we found the land, designed and built our home-studio step by step together, (at a most reasonable price to boot). So in the end, it turned out that it was a negative myth or rumours about Kyoto-ites. (However, we are rural people, not city dwellers, so there is a bit of a difference.) Unfortunately, like many cites, Kyoto until recently did not realize the value of its architectural heritage and destroyed plenty of the old to be replaced by the cheaper mass produced buildings. The average person simply can’t afford to rebuild in the “traditional” way. Because of the longevity of Kyoto, locals have retained unique everyday ceremonies and customs that other modern parts of Japan (Tokyo) have lost. Many tiny districts have festivals, not only of a religious significance. Paying respect to nature for the gifts and blessings of food and drink still, exist.

I met Tracey while she was visiting Vancouver through a mutual friend, Zak – who lives in Los Angeles (he went to that alternative high school with Tracey). In 2017 I was visiting Japan again and decided to go and photograph Tracey at her studio for the World People Project. She has created an amazing place, you feel the energy when you arrive also I had no idea that there is a lot of physical work with a wood-fired kiln in the country. It takes at least 20 hours up to 30 hours to get the kiln to the correct temperature, depending upon Tracey’s desired effect. Before that process even starts there is a lot of cutting and sorting wood. For the portrait we played with the idea of the outdoors, some of the images had Tracey with a chainsaw – the portrait presented has Tracey dressed in a poncho from one of her travels with an axe which is in contrast to our usual thinking of a potter sitting at a wheel in a gentle quiet setting.

If you enjoyed reading this conversation with Tracey please send me an email, I always love to hear your thoughts and comments. Feel free to have a look at Tracey’s website – her work is stunning and I would love to collect some of her sake vessels.
Tallulah can be commissioned for all types of portraiture, contact her to discuss further.