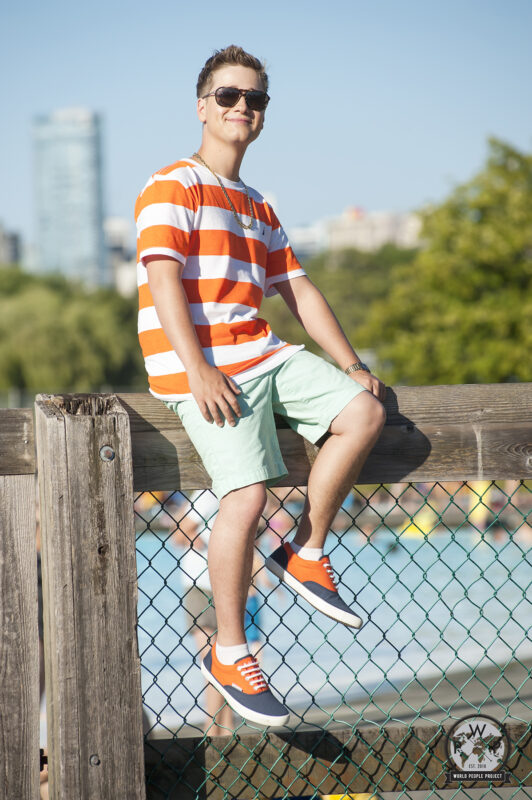 Age: I will leave that ambiguous; I would be rich if I had a dollar for every time I’ve been asked my age.

Provenance: I was born in Oliver, BC, but raised in Penticton.

How long have you lived in Vancouver? I moved to Vancouver in 2008 to study film at Langara College.

Occupations: I have worked at a series of restaurant jobs, spent some time as a foreman and painter with a company building oilrigs in Calgary. I then found a job as a travelling vacuum salesperson for Kirby. It was tough at first — three months of struggling before I finally sold my first vacuum. Within a year I ended up becoming very successful, rewarded with paid trips to San Francisco, Las Vegas, and a solid gold nugget bracelet. Kirby was going to promote me to a direct distributer position after having five months of top sales, the contract was waiting to be signed, but I received my letter of acceptance for film school at Langara College. Kirby effectively taught me tons about being positive with sayings such as: “persistence overcomes resistance,” “visualize you materialize,” and “think big, act big, get big.” Currently I am very focused on my career as an actor and rapper. I primarily play under-18 roles for film and television such as: Marley & Me: The Puppy Years, where I had a lead role. Recently I have been playing the character Aster Vanderberg on the second season of the TV show Some Assembly Required for Youth Television (YTV) and Netflix US/International. You can catch me as the voice of The King on a new cartoon called Mighty Mighty Monsters on Teletoon, this brought a nomination for best voice actor at the Leo Awards. I perform regularly at local clubs and have had the opportunity to perform at concerts with other rappers, Lil’ Kim, Swollen Members, B-Real (Cypress Hill), Warren G, Moka Only and Macklemore. I feel the most comfortable on a stage, I live to perform and light up an audience.

Passions and Interests: I live a hip-hop lifestyle, which means the whole culture, the clothes, the music and the attitudes. I am passionate about music and film, and am always in the process of producing new songs, videos, and other projects. In my spare time I go to a lot of live concerts. The beach is where I love to hang with my friends. Whenever I get the chance I skateboard, bike, hike and snowboard. Reading and social media on the computer keep me engaged with life and my many projects.

What do people know you for? Most people in Vancouver know me as Little T, the rapper. I have performed hundreds of shows in the area in the last few years. Internationally I would say people know me as Travis Turner the actor.

Thoughts on Vancouver? Vancouver is my home. Many family members over the years have lived here, so I have visited here as long as I can remember. When I first moved to Vancouver I really felt it was my home base. I have always wanted to pursue a life here since I was a child. Vancouver has been a great place for me to learn and grow as an artist. I dislike the grey, rainy days, though — I like sunshine.

I heard about Travis through a friend, the first time I met him he was rapping on stage at the Electric Owl and was instantly smitten with his enthusiasm and joy. I had never really thought about actors who look young enough to play much younger characters and was curious about how it happened. Our portrait session was taken on a hot sunny day in Vancouver.