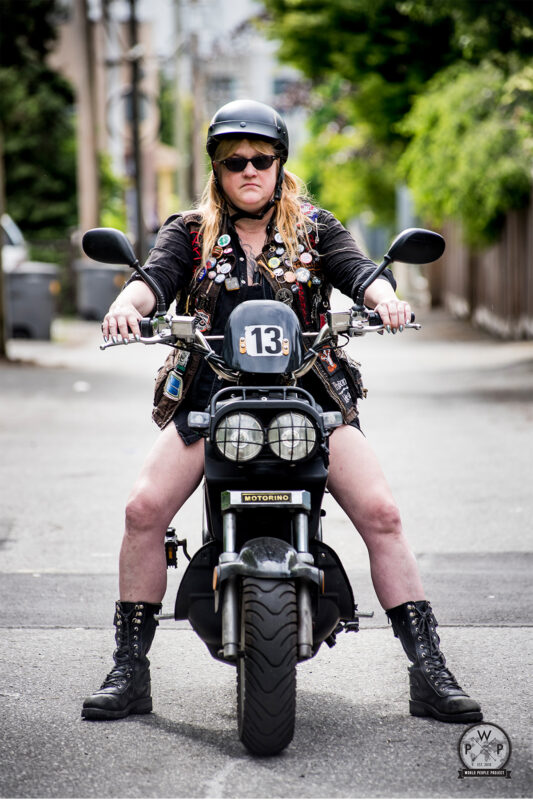 When I first started painting I would sign the paintings w13. I was born on the 13th along with my dad, brother, sister and grandfather. It’s sort of a witchy number.

Age: Almost 52, I am a Virgo double dragon

How long have you lived in Vancouver? About 25 years. Since I was a tween I had dreamed of seeing Vancouver. Living and working in Regina I was offered a chance to study fashion at The Helen Lefeaux School of Fashion Design on Cordova Street. I jumped on a Greyhound bus as a single mum with my two kids and made the move, sight unseen.

Occupations: I have done many things; been a hair shop owner, an artist, fashion eyebrow raiser, punk and metal music promoter and bartender. Punk culture hit me hard when my aunty brought me a punk postcard from London, England. At that time I was also a big fan of pioneering bass player and singer Suzi Quatro, who played the character Leather Tuscadero in the American sitcom Happy Days. My style still to this day is a mixture of rocker and punk. I had my first punk haircut — bright blonde with a shaggy top — at the age of 13. After graduating from the Marvel Beauty School in Regina I opened a hair shop there. Wanting to be a rock star but with minimal musical talent, I surrounded myself with music in the shape of bands and musician boyfriends. For almost 10 years I managed The Cobalt and The Asbalt (The Astoria); this is where most of Vancouver’s punk and metal bands performed. I also was the bartender, band booker and karaoke host at these bars. A lot of my karaoke babies went on to sing and play in their own bands. I ran as an independent candidate for Vancouver city council three times, in 2005, 2008 and 2011. I now feel semi-retired and mostly work from home, putting on punk or metal shows at Funky Winker Beans on Hastings Street on Friday and Saturday nights.

Passions and Interests: Art, music, freedom and politics have been long-time passions of mine. These days I love my cats: Maybelline and Houdini, more than people. I would be a crazy cat lady if I was allowed to have more than two cats in my totally black condo cave. I have become a prepper and my freezer has been turned into a survival chest filled with beef jerky and other dehydrated items. I have also started canning and therefore have a lot of food that will not perish. When I was young I learned some outdoor bush skills from my father and over the years I have been collecting survival gear , so if it all goes to hell I am ready. Drinking was a serious passion for me, after giving up beer I switched to Jägermeister, which led to a very unhappy liver. Now that I am two and half years sober I love the freedom of cruising around on my electric black scooter.

What do people know you for? A purveyor of heavy music! Getting things done and supporting new bands with a stage to play at my gigs.

Thoughts on Vancouver? When I first arrived in Vancouver I loved everything about it, especially the fruit stands. I lived near Norman’s fruit and salad on Commercial Drive — nothing like it existed in Regina. Everything seemed bigger, especially the trees. The weather was warm. No one stared at you if you had a mohawk. Vancouver means peace, freedom, minimal snow with wind chill, pot smoke, smiles and sweet peeps mixed up with Downtown Eastside dope gangs, gentrification, yuppies, hipsters, slumlords and archaic liquor laws.

I first met wendythirteen on a Friday night at a diner on Hastings Street, next to Funkys. She was sitting at the counter eating dinner, wearing a scuffed black leather jacket, her blond Mohawk standing straight up and a nonchalant attitude. wendythirteen has been a fixture in the Vancouver music world for a long time and is known as the punk rock mama. For the shoot I visited her home; the inside is painted entirely black, decorated with a lifetime of skulls, posters, memorabilia and abstract paintings by wendythirteen herself in a style reminiscent of early Jackson Pollock. The music playing was the sweet sounds of 1920s and 1930s big band tunes. I photographed wendythirteen with her electric black scooter.

If you liked reading this conversation with wendythirteen please feel free to send me an email, I always love to hear your thoughts and comments.
Tallulah can be commissioned for all types of portraiture, contact her to discuss further.