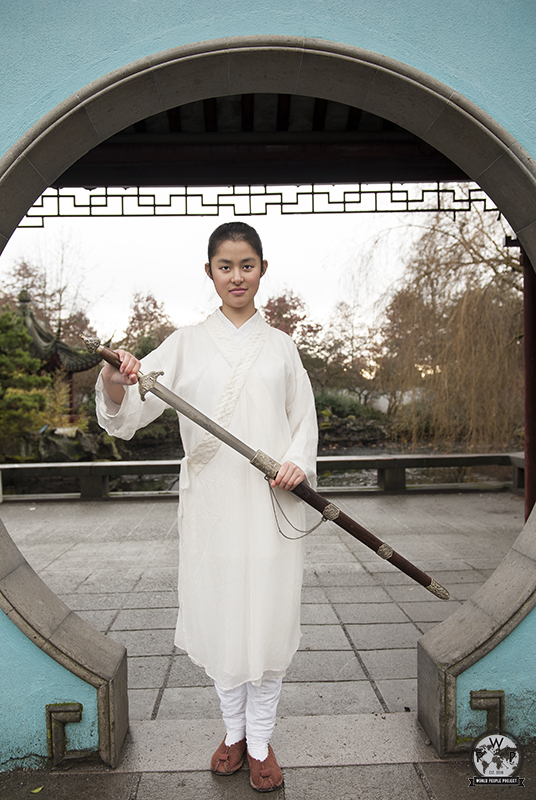 In China, we say our last name first, so I am Shu Xin. My given name, Xin, has several meanings, the most important being virtuous, but it also means strong and pervasive fragrance. It is a solemn thing to pick a name, holding all the hopes a parent could wish for their child.

Born: I was born in Xiangshan, Zhejiang in China. I lived in Shanghai for 14 years.

How long have you lived in Vancouver? I came here in the summer of 2012.

Occupations:  I came to Vancouver to study at Point Grey Secondary School. I first became interested in a cultural movement called Hanfu while I was still living in Shanghai. The Hanfu movement strives to revive the culture, ideas and clothing of traditional Chinese clothing dating as far back as 4,000 years.  Shortly after I arrived I became involved with the Vancouver Hanfu Culture Society, which has more than 300 members. I became the youngest member of its board of directors. The experience gave me the confidence to start a branch of the Vancouver Hanfu Culture Society at Point Grey. We have a traditional Han dance group and practice Chinese classical dance every morning. We are in preparations for this year’s Spring Festival Show. I am also on the board of a Vancouver charity Heart2Heart Canadian Youth Society; one of its mandates is to raise funds to build schools in rural China.

Passions and Interests: I really love traditional Chinese culture; the more I learn the more I love it. This led me to study sword dancing at Wudan Mountain, which is famous for Taoism and martial arts. I feel there is a trend in China to forget about its culture. For example, many nationals are choosing Western medicine over traditional Chinese medicine. I want to help change this trend and share my knowledge of Chinese culture through performances and films, as well as working hard with my societies. Sharing my love and passion of Chinese culture is very important to me; the challenge and sense of accomplishment is extremely rewarding. I am also passionate about photography and filmmaking. I have taken more than 20,000 photos and was an award finalist in the youth group in the 6th Canon Chinese Photography Contest. I enjoy cooking, travelling, drawing and sewing.

What do people know you for? When people first meet me, they think I am shy, quiet and introverted. However, if they get to know me, they realize I am funny, cheerful and optimistic. Most people think I look like a very traditional Chinese girl while others see me as an artist.

Thoughts on Vancouver? I like Vancouver because it is a beautiful city with lots of trees and little pollution. Life here is slow and leisurely. I feel it is a very welcoming city, with many people from all over the world mixing and mingling very well. Sometimes it seems Chinese traditional culture is better received here than in China. However, I cannot find good teas, silk fabrics or Shang Xia boutiques. I also miss my family.

I heard about Xin, a young Chinese woman who practices sword dancing, from a shopkeeper in Chinatown. I arranged to meet Xin, who came dressed in a simple and elegant traditional outfit reminiscent of period Chinese films. Xin’s shoes are hand made and her socks, called Yunwa, were bought when Xin studied sword dancing at the famous Wudang Mountains in China. Xin’s pants are called Ku and are loose to allow freedom of movement. Xin sewed the Ming Dynasty-style robe, called Shuhe, herself. The portrait was taken at the Dr. Sun Yat-Sen Classical Chinese Garden on a chilly and damp Vancouver day.